SINGAPORE - In the latest operational hiccup to hit Scoot, a Singapore-Melbourne flight which left Changi Airport on Tuesday morning (Jan 8) had to make a U-turn shortly after take-off.

Flight TR24, which departed at 11am, was forced to return 48 minutes into the flight, after pilots discovered a fault with the aircraft's weather radar component.

Confirming the incident, a Scoot spokesman told The Straits Times that the Boeing 787 landed safely back in Singapore at 12.49pm.

Affected customers were provided with meals while the issue was rectified.

The fault was resolved and the flight departed at about 6pm, she said.

As a result of the disruption, though, the return flight from Melbourne, TR25, has been retimed to depart on Jan 9 at 7.30am local time, instead of its original timing on Jan 8 at 10.30pm local time.

Affected passengers have been informed of the retimed flight in advance via e-mail and SMS, the airline said. 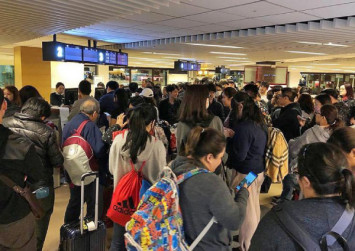 The incident is the latest in a string of flight disruptions that have hit Scoot because of technical issues with its B-787 fleet.

Since Nov 26, there have been about 10 major disruptions which have led to delays of up to 56 hours for affected passengers.

Scoot, the budget arm of Singapore Airlines, is one of several carriers that have been hit by a series of engine glitches that have affected Rolls-Royce's Trent 1000, which powers the B-787s,

The turbine blades inside the Trent 1000 "package C" engines are corroding and cracking at a quicker than expected rate.

In April last year, the Federal Aviation Administration (FAA) in the United States gave notice that B-787s fitted with the Rolls-Royce engine cannot operate more than 140 minutes away from an airport that they can divert to in an emergency - down from 330 minutes before.

This was after the European Aviation Safety Agency ordered additional maintenance checks on the Trent 1000.

Scoot, which has 18 B-787s, has at least one plane grounded at any one time. Rolls-Royce has promised the problem will be fixed but experts caution this could take many months.

Like many other budget airlines that operate with tight schedules and limited resources, including aircraft spare parts, the technical issues have led to significant delays for Scoot travellers.

Many also felt that Scoot could have done a much better job taking care of their needs while they were stranded.