Scoot's Taipei-Singapore flight turned back due to 'slight vibrations' on board; passengers affected by 18-hour delay

Scoot said the plane returned to Taipei "as a precaution" due to "slight vibrations felt" on board.

SINGAPORE - More than 160 passengers on a Singapore-bound Scoot flight from Taipei were affected by a flight delay that saw them return home about 18-and-a-half hours later than scheduled.

The 163 affected passengers landed in Singapore at 6.54pm on Wednesday (March 13), according to flight tracking site Flightradar24.

In a statement on Wednesday, Scoot said the plane returned to Taipei "as a precaution" due to "slight vibrations felt" on board. 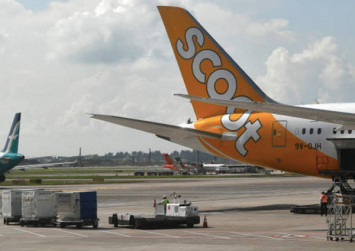 The plane landed in Taipei at around 11.08pm, Scoot said. TR993 had been scheduled to land in Singapore at 12.25am on Wednesday.

A larger aircraft was used for Flight TR996 from Singapore to Taipei on Wednesday morning to accommodate the additional 163 passengers on the return flight to Singapore.

Flightradar24 tracking information showed that the return flight, TR997, departed from Taipei at 2.38pm and landed at 6.54pm on Wednesday.

The airline said that transport, accommodation and meals were arranged for customers in Taipei during the delay.

"Scoot apologises for the inconvenience caused to our customers," it added.