Joseph Schooling celebrating after winning the men's 100m butterfly in the Hanoi SEA Games on May 16, 2022.

HANOI - The swagger that Singaporeans know and love about Joseph Schooling was back in the pool on Monday (May 16) as swimming’s golden boy claimed his first gold medal at these SEA Games in the 100m butterfly - also his fifth consecutive title in his pet event.

After Schooling touched the wall in 52.22 seconds to claim the top spot at the My Dinh Water Sports Palace, he grinned and slapped the water in celebration.

Schooling and his fans were happy to see him back to his winning ways at the biennial event, his first international meet since the Tokyo Olympics, where he failed to retain his gold medal from Rio.

The 26-year-old had endured a difficult six months after the Olympics, suffering the loss of his father Colin to liver cancer last November before enlisting for national service two months later.

On his race, Schooling said: “The timing was irrelevant for this one. It was about stepping up and getting your hand on the wall first. There are a lot of things we can work on during the race...

“But at the end of the day, I’m glad to get my one and only individual event out of the way. I could be doing more but you just swim the best you can when called upon.”

He added his second gold of the night in the 4x100m medley relay with Maximillian Ang, Quah Zheng Wen and Jonathan Tan.

The quartet touched home in 3:37.69, ahead of Vietnam (3:39.76) and Thailand (3:43.67). The victory was also redemption for Schooling and Co after a shock disqualification in the 4x100m freestyle last Saturday.

National head coach Gary Tan was full of praise for Schooling, whom he said has been a leading figure for the younger swimmers.

He said: “With what happened in the 4x100m, he really stepped up as an individual to really talk with the younger guys about how to move on from here... You can see the older guys like Zheng Wen and Jo rubbing off a very good vibe on the two boys.

“He’s been a leader, especially in these SEA Games and I know that he would want to make it extra special, he’s been great.”

While there have been reports that this could be Schooling’s last SEA Games, he hinted on Monday that he may not be hanging up his goggles and trunks just yet.

He said: “That (winning five consecutive 100m fly titles) feels great, makes you feel kind of old as well. I’m really pleased to be able to do that.

“At the end of the day, five in a row is really great, looking forward to maybe six next time I don’t know.”

Schooling, who has 29 golds at the SEA Games, could make it 30 if he competes in the men’s 4x200m freestyle relay on Tuesday.

Singapore is defending champions in the event, but Tan chose to keep his cards close to his chest and would not confirm if Schooling would be in the line-up.

He said: “I can’t say now because we are still in discussions on the relays... I’m going to tell the guys that we are just going to race as hard as we can and enjoy the process. If we beat Vietnam, it’s a bonus for us.”

Her victory was also Singapore’s first in the event since 2009, with the distance dominated by former Vietnam swim queen Nguyen Thi Anh Vien in the last three editions of the Games.

With the 25-year-old hanging up her swimsuit in March, the race to gold was wide open.

Ching Hwee, an undergraduate at Indiana University, eventually beat her rivals to add to her 800m freestyle title on Sunday.

She said: “Honestly this was the most challenging event for me physically and mentally. I was really nervous coming into this race, but I told myself that I’d just race.

“The time wasn’t that ideal but... I’m happy with a first-place finish and I’ll keep working into the first few days.”

The long-distance specialist added: “I feel that shorter distances really help me get that speed in, keeps me in check to make sure I’m not losing that much speed... it’s a really valuable asset to have.”

Sim was happy to taste success in the 50m breaststroke after winning a silver and bronze in the 200m individual medley and 200m breaststroke last week. 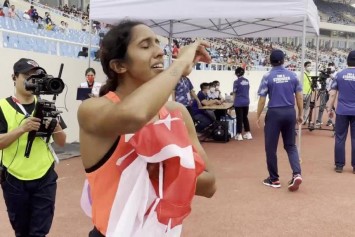 The 19-year-old, who was born in Singapore and raised in the United States, took the top spot in 31.43sec, while Thailand’s Jenjira Srisaard (31.63) and teammate Christie Chue (32.10) were second and third.

She said: “That took a lot out of me, overall I’m happy. It’s a good warm-up for the 100m breaststroke (on Thursday). I’m pretty excited.”

The gold-medal rush is expected to resume on Tuesday with Quah siblings Zheng Wen, Ting Wen and Jing Wen competing in the men’s 50m backstroke and women’s 50m butterfly.

Ching Hwee will be gunning for a third gold in the 400m free while the men’s 4x200m free relay team are out to retain their title.