Thailand's Ben Davis in action against Singapore at the Hanoi SEA Games on May 9, 2022.

SINGAPORE - National Under-23 coach Nazri Nasir apologised to Singapore football fans after his charges were thumped 5-0 by Thailand in their SEA Games Group B clash at the Thien Truong Stadium in Nam Dinh on Monday (May 9) night.

The result left the team’s hopes of a medal at the Hanoi SEA Games hanging by a thread.

They must now beat Malaysia and Cambodia in their remaining games and hope other results go their way, in order to claim one of the top two spots in the group and progress into the semi-finals.

If they fail, this would mark the fourth straight edition of the SEA Games where Singapore have suffered a group-stage exit.

“I want to say sorry to the fans back home,” Nazri told The Straits Times after the game.

“Tonight’s result is not ideal but we need (the fans’) support now more than ever for the next two crucial games. We are still in this and knowing that you guys are behind us will give us the extra boost.”

The former national skipper, 51, made no excuses for the heavy defeat and admitted that poor concentration led to his team’s downfall.

He added: “The 5-0 (scoreline) is painful, it makes me sad, but we can’t mourn it and do much about it any more.

Read Also
Fulham player Ben Davis, who defaulted on NS, says Thai citizenship is the 'best choice' for him 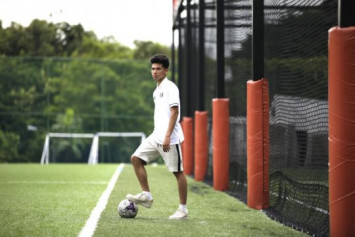 Thailand scored their opening goal at the end of a cagey first half, and it was ex-Singapore youth international Ben Davis who made the impact for them.

The 21-year-old attacking midfielder earned a penalty with seconds left in the half after he was brought down in the box by Syahrul Sazali, and dusted himself off to send goalkeeper Zaiful Nizam the wrong way.

Davis, born in Phuket to a Thai mother and an English father, had moved to Singapore with his family at age five before becoming a citizen four years later. He represented the Republic up to the Under-19 level and was even called up for the senior Lions squad once but did not earn a cap.

But he opted to switch his international football allegiance to his country of birth, after he defaulted his national service obligations in 2019, following his signing for English club Fulham. He is now with English third-tier club Oxford United.

After Davis’ goal put the Thais in the driver’s seat, a shambolic start to the second half put paid to Singapore’s hopes of a comeback.

They conceded twice within six minutes of the restart, first after Harhys Stewart turned the ball into his own net off Worachit Kanitsribampen’s low cross in the 47th minute, before Ekanit Panya slammed the ball in from close range after a melee in the 51st.

Ekanit, one of five players in the Thai starting XI with senior caps – Singapore had three – grabbed his second in the 67th minute with a cool finish off a counter attack.

Korawich Tasa scored the Thais’ fifth nine minutes before the end with another close-range finish, with the Republic never truly threatening Thai goalkeeper Kawin Thamsatchanan throughout the game.

The result left Singapore at the bottom of Group B after two games.

They had opened their campaign with a 2-2 draw with Laos last Saturday, having trailed 2-0 for most of the game.

Nazri’s team will now face an uphill battle when they play Cambodia tomorrow and Malaysia on Saturday.

Cambodia trounced Laos 4-1 in the other Group B match played earlier yesterday, while Malaysia had beaten Thailand 2-1 in their Games’ opener last Saturday.