A new video of a traffic accident that killed four Singaporeans in Port Dickson has emerged.

The harrowing incident happened at a T-junction in Jalan Lukut Sepang on Wednesday (Jan 3), around 2.30pm, and involved five vehicles - a Singapore register Honda Stream, a tipper truck, a Mercedes-Benz SUV, a Perodua Myvi and a motorcycle.

The new video showed another perspective of the accident taken from behind the Honda Stream.

During the time of the incident, the four victims were in the Honda. 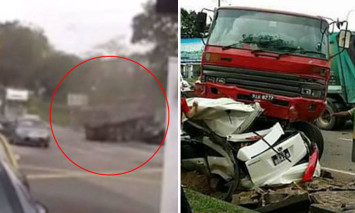 Another motorcycle rider was injured in the accident as well.

A police spokesman said that the 54-year-old lorry driver fled the scene on foot after the accident but subsequently turned himself in at the Lukut police station, at around 5.30pm.

The driver has been remanded as part of investigations into the accident, reports New Straits Times.

Magistrate Siti Khairiah Abd Razak has granted the remand order against the driver, which runs Thursday (Jan 4) to Sunday (Jan 7).

Port Dickson district police chief Superintendent Zainudin Ahmad added that the case will be investigated under Section 41 (1) of the Road Transport Act (APJ) 1987.