Eight people are linked to a nurse working at Tan Tock Seng Hospital, who tested positive on April 27, 2021.

SINGAPORE - The nation's first Covid-19 hospital cluster has grown to nine people either working or warded at Tan Tock Seng Hospital, as the authorities work aggressively to contain the spread of the virus and unearth all cases, including enforcing lockdowns in two affected wards.

Eight people - a doctor, a healthcare assistant trainee and six patients - are linked to a nurse working there who tested positive on Tuesday (April 27), and were detected mainly by the Health Ministry's proactive testing, the Ministry revealed on Thursday (April 29).

The hospital has stepped up clinical surveillance of all inpatients who may develop fever and ARI (acute respiratory infection) symptoms. As a precautionary measure, all patients and staff in other TTSH wards will also be tested for Covid-19, including those with no symptoms.

"This additional testing will enable us to draw out any hidden links," said MOH.

"Our strategy is to aggressively test and draw a wide ring around the cases, to try and prevent further spread."

Staff and patient movement in all the main wards has been minimised to prevent cross-infection, and no visitors are allowed into the hospital except for critically ill patients.

In addition, elective cases will be deferred except for urgent ones, and non-life-threatening accident and emergency cases will be redirected to other hospitals.

All close contacts of the cases, including patients, visitors and staff who have been in the affected wards, will also be placed on quarantine.

Those who were at the hospital on Thursday told The Straits Times that they were confident the hospital is taking steps to ensure that infections are reined in.

Read Also
New Covid-19 clusters: Who are in the TTSH and ICA officer-linked clusters 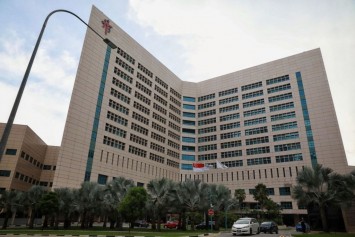 Other hospitals across the island told ST that strict infection prevention procedures were in place.

SingHealth, for instance, said that as a precautionary measure, all its institutions will step up screening of patients and visitors to its campuses.

As the virus rages elsewhere in the world, experts said the cluster here was cause for concern, and a stark reminder to remain vigilant.

Professor Dale Fisher, a senior infectious diseases consultant at the National University Hospital, said: "We know Covid-19 is very unforgiving. Such a cluster could have occurred anywhere and we just have to make sure that if there is a case at a hospital, it will be picked up and not allowed to spread."

Meanwhile, 32 Immigration and Checkpoints Authority (ICA) officers at Changi Airport have been placed under quarantine while around 100 will be tested for Covid-19, after a 38-year-old ICA officer working there tested positive.

Following his positive test on Tuesday, seven of his family members have been found to be infected.

The last community case is a 39-year-old Vietnamese woman working as a cleaner employed by Octo Jet Building Maintenance Services, and deployed at a community care facility at Tuas South. The woman, who had been vaccinated, helped out periodically at a food stall at The Summit, at the National University of Singapore's Bukit Timah campus.

This takes the number of community cases to 16 on Thursday, a nine-month high for the nation which has grown used to low or zero cases in recent months.

ICA said that common and staff areas that its officer would have come into contact with have been disinfected thoroughly, including areas such as the immigration counters, immigration offices, pantries and toilets.

There were 19 imported cases who had been placed on stay-home notice upon arrival in Singapore; with none in dormitories.

Globally, the virus outbreak, which began in December 2019, has infected more than 149 million people. Over 3.15 million people have died.

The 35 new coronavirus cases on Thursday took Singapore's total to 61,121.

• Tan Tock Seng Hospital wards 7D and 9D, where infected patients had stayed, have been locked down. All close contacts of the cases, including patients, visitors and staff who have been in these wards, will be quarantined.

• Clinical surveillance of all inpatients who may develop fever and acute respiratory infection symptoms being stepped up.

•All patients and staff in other wards, even if asymptomatic, will also be tested.

• Staff and patient movement in the hospital's main wards has been minimised to prevent cross-infection.

• No visitors are allowed except for critically ill patients.

• Elective cases have been deferred. Accident and emergency cases that are not life-threatening will be redirected to other hospitals.