Seeing baby alive was 'best moment of my life': Woman who had a stroke while pregnant

Ms Joy Chia, who has two daughters, suffered a stroke in 2019 when she was seven months pregnant.

SINGAPORE - A leisurely family outing at a mall turned into a nightmare when a woman - who was seven months pregnant - collapsed after suffering a stroke.

"It felt like my brain was going to explode. I fainted right on the spot," Ms Joy Chia, now 34, said of the incident in August 2019.

She was rushed to a hospital, where doctors raced to operate on her skull to drain out excess fluid that was putting pressure on her brain.

But her baby's life was at risk and had to be rescued through an emergency C-section. It was a success, but Ms Chia was placed in a separate intensive care unit (ICU) and saw her newborn daughter only a week into her month-long recovery.

"I almost fell into depression being apart from my baby. Seeing her alive and well was the best moment of my life," said Ms Chia, a financial services consultant who also has a five-year-old daughter.

A stroke is a potentially life-threatening disease that occurs when blood supply to the brain is interrupted, which can disable bodily functions that are controlled by the brain, such as muscle movement.

The stroke survivor's story was highlighted by Law and Home Affairs Minister K. Shanmugam on Saturday (Dec 4), who said her spirit to overcome adversity moved him.

He was speaking at the 25th anniversary charity dinner of the Singapore National Stroke Association (SNSA), a support group for survivors and caregivers.

"You can imagine the difficulties, but Joy saw in them the positives. Her newborn daughter was a source of strength," he said of Ms Chia, an active volunteer in his constituency in Nee Soon GRC.

"Joy became even more determined to overcome the hurdles, with tremendous willpower, resilience and support from family and friends." 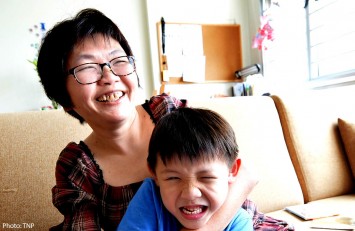 Mr Shanmugam said more people are suffering from strokes - a leading cause of adult disability - and cited a 50 per cent increase in the number of stroke episodes recorded in 2019 compared with 2010.

He said 25 new stroke cases occur daily here and added that the number is likely to rise with the rapidly ageing population.

Given that the risk of stroke doubles every 10 years past the age of 55, it is likely more people will encounter the ordeal, Mr Shanmugam said.

Speaking to the media, he stressed the importance of exercise and a healthy diet, as well as to understand the symptoms of a stroke to be able to act fast when they show.

But the mortality rate has fallen in the past decade, likely because more people are receiving treatment sooner, he said, crediting the role of the SNSA in encouraging early treatment and supporting survivors.

The association, which was started as a patient support group in 1991 by a team of healthcare workers, has grown into an organisation that connects with thousands of beneficiaries each year.

Today, Ms Chia frequently volunteers with SNSA, often sharing her experience with other survivors to lift their spirits.

"When I was in hospital, I couldn't accept the fact that I had a stroke. I understand why people can have suicidal thoughts during this period and I hope to help and encourage them," said Ms Chia, who still struggles to fully extend her fingers following the stroke.

She remembers when her newborn child, Bernice, was wheeled in from her ICU ward to meet her mother for the first time.

"She also had tubes up her nose, terrified. I remember thinking if she could fight, I must fight too and take care of her."