In the wake of viral footage of a particularly hands-on training session that prompted a gym to ban him, the personal trainer accused of touching his client inappropriately told AsiaOne on Wednesday (Aug 5) that he would be filing a police report against the "false accusations".

Cheryl Loh, another personal trainer, had posted a video on Monday (Aug 3) calling him out for "touching inappropriately and groping", writing that his behaviour was "not normal".

However, the accused, who goes by the name David Mesut, said that his client had consented to the physical contact.

In the clip, David is shown touching his female client's buttocks several times while she is performing several exercises at local gym Apeiro Performance.

Loh, who frequents the gym and conducts sessions there, told Lianhe Zaobao that she had noticed David's behaviour about two weeks ago, but held her tongue as she was not certain if the pair were a couple.

But when she saw them again on July 31, she decided to film their interaction.

She later contacted the woman and informed her that David's methods were "unprofessional".

In her text conversation with the woman, Loh explained: "There are many ways to teach muscle engagement, and the way he is doing it is not how a professional coach should behave."

The woman told Loh that she had felt uncomfortable and previously told David not to touch her buttocks. However, the trainer allegedly told her that he needed to do so to "check [her] muscle".

According to Loh, the woman has stopped training with David.

"She will not be making a police report, but she has given me the permission to share about this as she also wants all women, girls, or even guys out there to know that this behaviour is not acceptable and that nobody should put up with any actions that make them feel uneasy, uncomfortable, and disrespected."

As Loh's post gained traction online, receiving over 15,000 likes and 900 comments, Apeiro Performance said in a statement on Aug 4 that they have banned the trainer, who is not an employee of the gym, from their facilities with effect from Aug 2.

In an Instagram story, the gym added that "any kind of such action will not be tolerated by our trainers and staff alike". 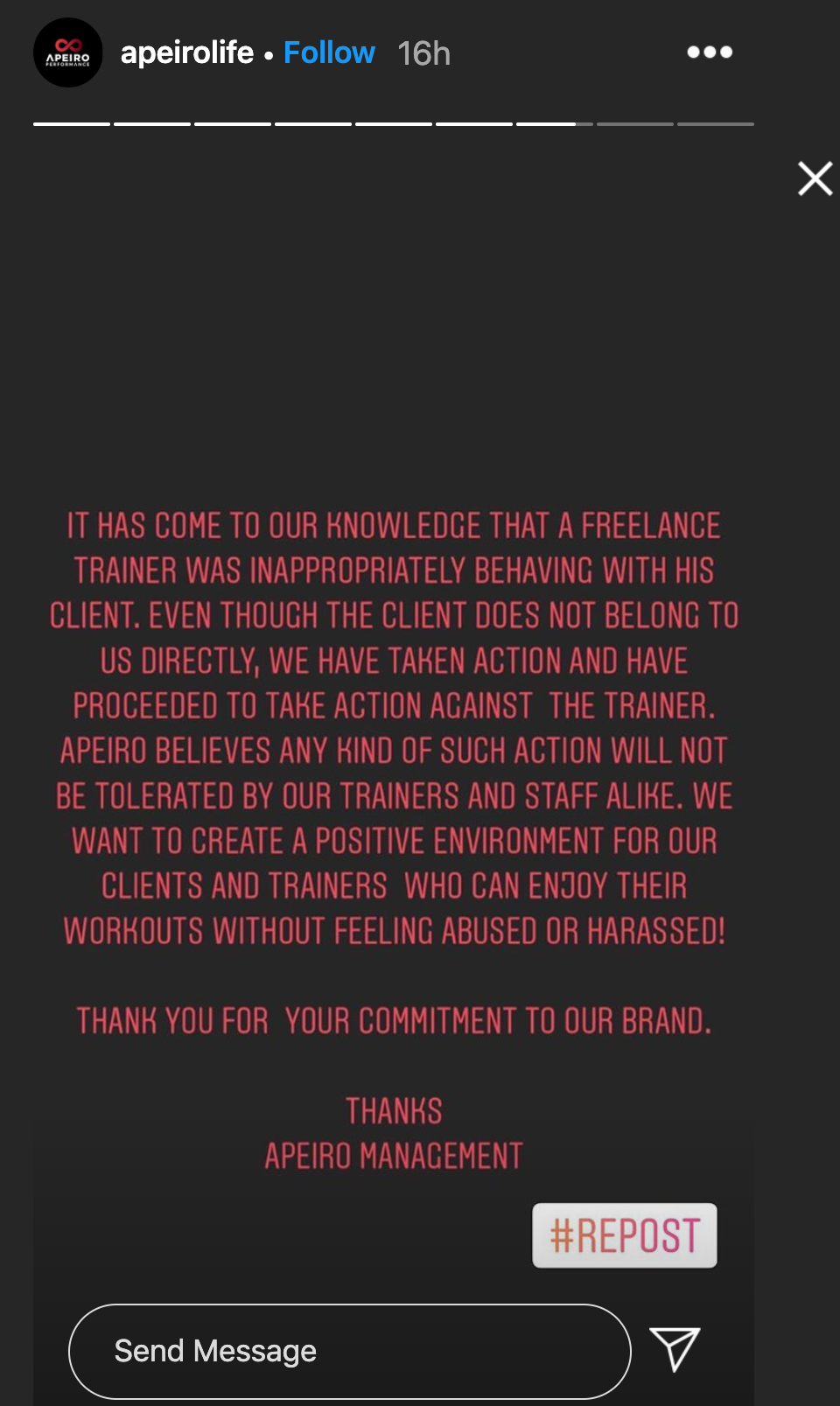 However, when contacted by AsiaOne, David denied the allegations of sexual misconduct.

He said he would be making a police report on the "false accusations" and is obtaining legal advice.

Maintaining that his client had given consent to the physical contact, he said: "The video was shown to me by the client and we both discussed the exercise that she was doing. She did not place any objection to any aspects of the video or the fact that there was physical contact.

"Right from the beginning, I had told her about physical contact on a particular part of her body and she said that she understood and therefore, consented."