[UPDATE Nov 26] Raybe Oh has returned to Singapore General Hospital for surgery and will remain there for a month, the Straits Times reported on Thursday.

In an Instagram story, she thanked everyone for their well wishes.

Nine months after trying to save her fiance from the fiery Tanjong Pagar crash, Raybe Oh told her friends: "I will live on bravely."

The 26-year-old was discharged from Singapore General Hospital in June after receiving treatment for burns on 80 per cent of her body.

Veteran getai singer Liu Lingling, who has known Oh for over 10 years, told Shin Min Daily News on Wednesday (Nov 24) that she last heard from her in September.

"After the accident, many of us thought she wouldn't make it. I was the only one [who thought otherwise], so I went to pray for her.

"When I found out she was okay, I was very emotional," said the 58-year-old.

According to Liu, the young woman will undergo the last round of skin graft surgery this month and she's now being cared for by her mother.

Read Also
'I regard Raybe as my daughter': Father of driver who died in Tanjong Pagar crash 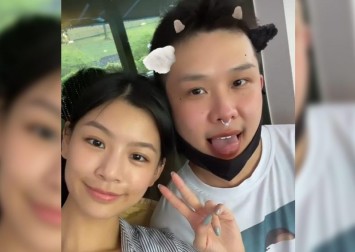 "She may have lost some things but she has received everyone's love," Liu said, adding "It's a miracle that she survived, she'll be a strong role model for others in the future."

Komei Foong, another friend of Oh's, told the Chinese daily that she's been keeping in touch with her via social media.

"The things she shares every day are very positive, people who don't know her may not realise that she's gone through such an ordeal."

In recent weeks, Oh was seen updating her Instagram account with food pictures, but the most poignant post was a photo of her with her late fiance Jonathan Long.

The 29-year-old man, along with four friends, were killed after the BMW M4 coupe he was driving crashed into a shophouse along Tanjong Pagar on Feb 13.