'She's like an angel sent from heaven': Singapore couple reunite helper with daughter after 3 years in Bali surprise

When you have a gem in the household, you treat them well.

That's what one Singapore couple did when they planned a special surprise to reunite their helper with her daughter during the family's recent vacation to Bali.

In a TikTok video posted on Saturday (Oct 15), user Theinesh Pac shared how the entire thing went down, writing how "it has been three years since our helper saw her family and her daughter".

"She's been so good to us and our kids so we decided to surprise her on our Bali trip and flew her sister's family and daughter in to join us."

Speaking to AsiaOne, Theinesh shared that the trip in early October was also planned as a birthday gift for their helper.

In the clip, the family is seen checking in to their villa in Bali, with the helper still clueless as to what, or whom, laid in wait.

Later on, a young girl believed to be the helper's daughter is seen walking into the villa to surprise her mum. She is accompanied by another woman and a child.

The helper breaks down upon seeing her family, as she moves to embrace them as well as her female employer, who was also teary-eyed.

@neshpac We have been so lucky to have her assist us with our growing family and maintain the sanity at home since 2019. Thanks kakak! #reunion #bali #seminyak #family #fypシ゚viral ♬ Motivational music(792528) - Draganov89

Viewers were equally touched by the heartwarming reunion, with many commending the Singapore couple for their generous gift.

Wrote one TikTok user: "This is what it means to treat our helpers right! It's so important that we never ever forget that they're human too."

Theinesh shared with AsiaOne that their 39-year-old helper Zulae joined the family in 2019, when the couple's first son was born.

"Zulae was like an angel sent from heaven as she took care of the family, household and most importantly, my two kids. She is the most joyful person I have ever met without a single bit of negativity in her."

He also shared how the single mother worked hard to provide for her 11-year-old daughter back in Semarang, Indonesia.

"After being parents we couldn't imagine the pain she goes through being away from her daughter for so many years," he added. 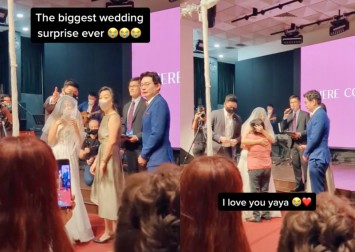 The couple, who both work in the aviation industry, had encouraged Zulae to visit her daughter back home after borders reopened but she declined.

"That was when my wife and I decided to reunite this family," shared Theinesh, adding that his wife Denezia was "in cahoots" with Zulae's sister since August to plan the surprise.

The effort was well worth it.

"All of us were in tears of joy witnessing the reunion of mother and child," said Theinesh, adding that their helper "kept hitting her head to see if she was dreaming".

"We knew that as human beings we could have a positive impact on another human who has done so much for us, so we took the leap and got it done."

The family may be back in Singapore, but the memories have been etched into everyone's hearts, especially Zulae's. 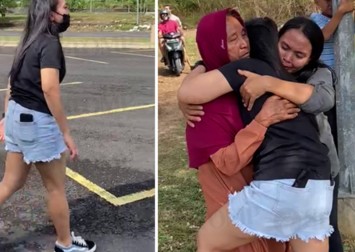 Shared Theinesh: "She still often thanks us in tears for what we have done and says she will never forget this moment for the rest of her life.

"Life's back to normal in Singapore again but now there's an even bigger smile on Zulae."

It is certainly heartening to see and hear about such acts of care from employers out there.

In July, Stomp reported how another employer helped reunite their 30-year-old Indonesian helper with her family after six years of separation.

In another tear-jerking video shared in April, a Singaporean man flew in their retired Filipino helper for his sister's wedding as a surprise. Both of them had been cared for by the 72-year-old, who had worked for the family for 27 years.