Photos show the bottom steps of the escalator damaged badly, with some parts strewn on its landing on the second floor.

SINGAPORE - Shoppers at a mall in Tampines were shocked when the bottom steps of a moving escalator collapsed on Saturday evening (April 13).

The Straits Times understands that no one was injured and that the area has been cordoned off.

The incident occurred at about 9pm at an escalator descending from the third to the second floor of the mall, Shin Min reported.

A nearby tenant told the Chinese-language newspaper that they had heard loud sounds from the escalator before the bottom steps broke apart.

The four people who had just stepped onto the escalator reacted quickly to press the emergency stop button.

A photo provided to Shin Min shows the bottom steps of the escalator damaged badly, with some parts strewn on its landing on the second floor.

Repairs were still being made to the escalator as of Sunday evening, ST understands. 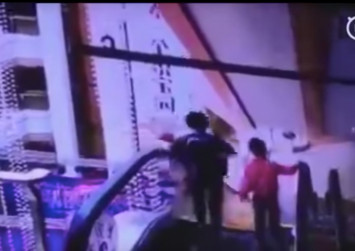 In response to ST's queries, both the police and the Singapore Civil Defence Force said they did not attend to any incidents at the time and location.

ST has contacted AsiaMalls, which manages Tampines 1, for more information.