SINGAPORE - A Singapore Airlines flight which left Changi Airport early Monday (Nov 19) morning made a U-turn less than an hour after take-off, after pilots reported a drop in cabin pressure to air traffic controllers.

It is not known what caused this to happen on the Boeing 777-300ER plane.

According to FlightRadar24, Flight SQ336 bound for Paris had climbed to 24,000 feet and was over Malaysia when it turned back towards Singapore.

Oxygen masks were deployed and the aircraft descended to 6,000 feet, The Straits Times understands. 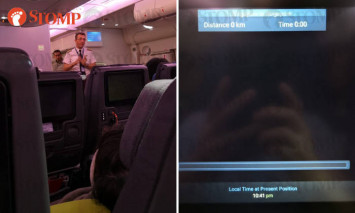 The aircraft had to circle for about an hour to dump fuel before it could land.

Confirming the incident, an SIA spokesman said there were 234 passengers and 17 crew on board the aircraft. No injuries were reported.

At Changi Airport, emergency vehicles were standing by to receive the flight.

The plane touched down at around 2.30am.

Following an aircraft change, the flight departed Singapore at 6am and is scheduled to arrive in Paris at 12.17pm (Paris time), SIA said.

SQ336 was originally scheduled to arrive in Paris at 7.15am (Paris Time).

A passenger who posted photos taken inside the plane on Twitter said they had been transferred to the SIA flight after an Air France service they were booked on was cancelled due to technical issues.

@airfrance @SingaporeAir Congrats to Sing. Airline with well organised care for passenger while waiting and already a survey to get feedback. 1-0 for SA. AF flight cancellation was much more chaotique and no request for feedback. Well i guess here it is! pic.twitter.com/oKh1MxxZaa