SINGAPORE - On Thursday night (Oct 11), for the first time in five years, Singapore Airlines Flight SQ22 took to the skies from Changi Airport.

In a nod to its history, the non-stop Singapore-Newark (New Jersey) service reclaimed the same flight number that was used when SIA operated the route between 2004 and 2013.

That particular service was axed when high fuel prices, among other factors, made it unsustainable.

Oil prices are on the march again but, this time, SIA hopes to make it work with a more fuel-efficient aircraft - the Airbus 350-900ULR - which the Singapore carrier is the first to fly.

SIA's two-class plane for SQ22 offers 67 seats in business class and 94 in premium economy for the 19-hour flight.

At Changi Airport Terminal 3 on Thursday, passengers started arriving from about 9pm for check-in.

Many were excited to be part of a history-making flight - the world's longest non-stop commercial service.

Indian national Vipin Bagga, 39, flew in specially from New Delhi to take the direct flight to Newark. "I have loaded my phone with lots of material to last me 19 hours," he said.

Singaporean software engineer Joel Kang, 30, who lives in New York, added: "It's my birthday so this is my present to myself. I flew here via Frankfurt and am flying back on this non-stop service. I try to come home once a year to spend time with my family. If I can survive this flight, it's a great way to save some time."

In the gatehold room, SIA had prepared a grand send-off, with a pre-flight reception complete with the cabin crew's rendition of Frank Sinatra's New York, New York.

The airline's senior vice-president for sales and marketing, Mr Campbell Wilson, who was also on the inaugural flight said: "Tonight's event is one that we have been eagerly anticipating since then (2013, when the flight was axed)."

The launch of the Singapore-Newark service signifies a new era of growth for the important United States market, he said. 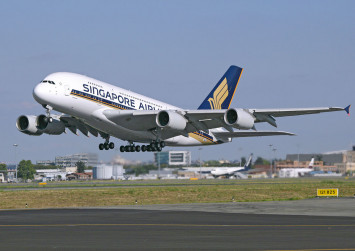 SIA is offering new services to New York (Newark), San Francisco and Los Angeles, and in all, the airline will be operating 27 non-stop services each week from Singapore to the US before the end of this year.

"These new flights will also provide convenient connections beyond Changi Airport, helping to boost connectivity to and through the Singapore hub," Mr Wilson said.

In October 2016, the airline started flying non-stop between Singapore and San Francisco - a service that can be operated with the A350-900 aircraft and does not require the ultra-long-range variant.

On Nov 2, it will begin flying non-stop to Los Angeles as well.

He noted that four airlines currently connect Singapore to six US cities - Honolulu, Houston, Los Angeles, San Francisco, Seattle and New York City. With SIA's new non-stop services, there will be 72 weekly passenger services between Changi Airport and the US.

Mr Tan said: "The demand for air travel between North America and South-east Asia is strong and expected to stay robust in the coming years. We are confident that the Singapore-Newark service will be well received by Changi Airport's passengers and believe that there are further growth opportunities in the Singapore-US market."