Ms Zabrina Kng believes her experience as part of a cabin crew has been helpful in her new role.

SINGAPORE - After 14 years of flying with Singapore Airlines as a cabin crew member, Ms Zabrina Kng decided it was time for a career switch - to nursing.

Her new career would allow her to pursue her life-long interest in healthcare and have more time to spend with her ageing parents.

She learnt about the Workforce Singapore's Professional Conversion Programme (PCP) for Registered Nurses (Diploma) in 2017, and set her sights on applying for the two-year programme.

But after finding out that she had missed the intake for the year, she continued working as a cabin crew member for another year so that she could save up for the programme.

By the time her contract with SIA ended in 2018, she had saved $12,000, which she used to supplement the monthly allowance of around $2,000 she received from the two-year PCP.

But for Ms Kng, 34, it was still an adjustment financially.

"Initially when I first started, I really had to adjust my lifestyle. I told myself that since I've made this switch to nursing, I needed to persevere," she added.

Another challenge she faced was having to return to school in her 30s. "It was an accelerated diploma which would normally take three years to complete. So the learning curve was very steep for me," she said.

Read Also
From airplanes to hospitals: How Singaporeans have adapted in the Covid-19 era 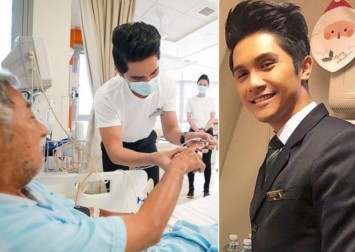 She graduated from the programme in April and began working for Woodlands Health Campus, although she is temporarily stationed at Tan Tock Seng Hospital.

She believes her experience as part of a cabin crew has been helpful in her new role.

"There are many similarities between being a cabin crew member and a nurse, like communication skills, empathy and being able to work well under pressure.

"These are all soft skills that I've gained in my years as cabin crew, and I think are plus points when you are up against someone who is a fresh graduate," she added.