SIA stewardess publicly rebuts passenger who named and shamed her

Of all the complaints to receive, this one topped one flight stewardess' list.

Ong Weiyu, an air stewardess for Singapore Airlines (SIA), found herself on the receiving end of an open complaint from an unsatisfied passenger who had issues with her attitude and service — she had allegedly not addressed her as Madam.

Disgruntled by the passenger's complaint, she ranted about it on Facebook yesterday (Jan 29). The post has since been removed.

The passenger had aired her displeasure towards Ong on one of SIA's Facebook posts on Jan 22. In her comment, she criticised the flight attendant for failing to address passengers as Sir or Madam, as well as for informing her that there were no pillows available on her flight from Denpasar to Singapore on Christmas Day.

She also alleged that none of the flight attendants wished passengers Merry Christmas.

"Basic courtesy is a must for the service industry like a smile and salutation," she wrote.

Ong, on the other hand, offered a different account of the story.

She first explained how it was mandatory for flight attendants to address their passengers as Sir or Madam. However, the passenger had allegedly told her: "Miss Ong, you are very rude. You shouldn't address us as Sir or Madam."

At a loss for words, Ong had excused herself. She initially thought the passenger might have been a member of SIA's Priority Passenger Service Club (PPS) and therefore would be granted additional privileges and personalised service, but it turned out otherwise.

According to Ong, the passenger and her family were last-minute additions to the flight. As such, they had also signed a waiver, clearing the airline of any fault should they not receive an in-flight meal. Even so, as the woman had two kids with her, Ong decided to serve them as per normal. 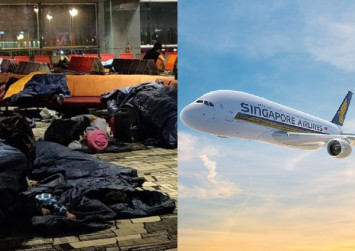 Despite her efforts, she claimed that the passenger subsequently ignored her when asked if she would like a drink, nor did she thank Ong for providing her kids with meals.

"She was the only one being all sulky," Ong wrote, elaborating that the children and her husband were amicable.

The flight attendant's Facebook post caught the attention of many prior to its removal, gathering over 300 shares as of today (Jan 20).

While some netizens commented that the passenger appeared to be rather self-entitled, others questioned if SIA staff members were allowed to vent their frustrations on a public platform.

An SIA spokesperson told AsiaOne that the relevant department was looking into the matter. In the meantime, they have reached out directly to the customer.

We've also reached out to Ong for more details.

#SIA (Singapore Airlines) #Facebook #In Case You Missed It