SIA's 400-plus trainee pilots, cabin crew: Half let go, other half to leave when training completes

The Singapore Airlines Group has said last week that it would cut around 4,300 positions.

SINGAPORE - Singapore Airlines (SIA) has let go of about half of its cadet pilots and cabin crew trainees as it continues to downsize its workforce.

The rest will have to leave after their training is completed.

The Straits Times understands that there are more than 400 at various stages of training.

Those who had to abort their training are mainly foreigners.

A spokesman for the airline said of the decision to allow the rest to continue: "SIA is committed to supporting them through their training programme."

The programme for cabin crew lasts less than three months.

However, the airline will not be able to keep them after that due to the "current surplus in staff numbers", he said.

Retained cadet pilots who need to complete the overseas segment of their training will be put on no-pay leave until SIA is able to safely resume this segment of the training programme, he added.

"Cadet pilots will be released after they have completed their basic training programme, which includes the overseas segment, due to the current surplus in staff numbers."

SIA will be open to hiring them should there be a demand for cabin crew or junior pilots when the demand for air travel returns to pre-Covid levels, the airline added. 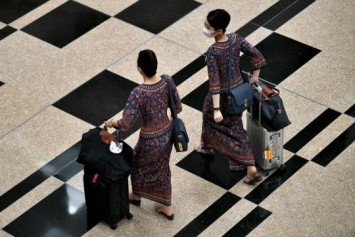 A severe downturn in the aviation industry has forced some airlines out of business, while others have had to cut costs drastically.

In its latest and most drastic measure to deal with operations battered by the Covid-19 pandemic, the SIA Group said last week that it would cut around 4,300 positions.

They will continue to receive their salaries until Dec 15 this year, and will also retain their medical and other benefits until then.

In addition, each affected employee will be paid in lieu of the notice period in their employment contract. This can be up to three months' salary.

Those who have been in service for two years or more, will receive one month of pay for every year of service, capped at 25 months.