SINGAPORE - On Dec 25 last year, Miss Mikkaela Cordova, 20, and her brother Joshua, 13, jumped into a pool at their condominium to save a teenager who was drowning.

After pulling the unconscious 16-year-old boy out of the water and finding that he was not breathing, Ms Cordova performed cardiopulmonary resuscitation (CPR) on him until he regained consciousness.

For their heroic act at Marymount View condominium, the pair were presented Community Lifesaver Awards by the Singapore Civil Defence Force (SCDF) on Saturday (Jan 5), at the 1st SCDF Division headquarters in Queensway.

Their father, Mr Jun Cordova, recalled that the family had planned to go out, but decided to stay in for a quiet Christmas afternoon. 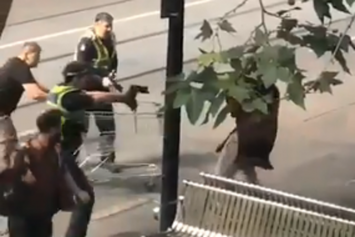 They were playing Scrabble in the living room of their 10th-floor unit at about 6pm when they heard a cry for help.

"We had opened the windows because we wanted the breeze. Then we heard a sudden cry for help," said Mr Cordova, 49.

His wife could see a boy struggling in the pool. While she called 995, Mr Cordova and his two children rushed downstairs.

Mr Cordova said his daughter volunteered to jump into the water to save the teenager, as he was unwell. Mr Cordova, who works in the hotel industry, then ran to the guardhouse to get help.

The 1.7m-tall teenager was found lying face down at the bottom of the 2.4m-deep pool.

"I couldn't pull him out on my own, that's why he (Joshua) jumped in and helped me out," said Miss Cordova, who had taken formal swimming lessons in primary school.

After they pulled him out, she performed CPR until an ambulance arrived and took the boy to Tan Tock Seng Hospital.

Miss Cordova, who works here as a regulatory and quality assurance assistant, first picked up the life-saving skill while taking a course at a polytechnic in Canada.

The incident was the first time her CPR skills were called into action.

"I am very grateful and very honoured to be able to do something like this. It makes me really appreciate the people who do this every day as a career," she said.

"At first, a part of me wasn't sure it was actually happening, until we saw the guy (in the pool)."

While she remained calm throughout the ordeal, it was when SCDF officers arrived on the scene that the reality of the situation set in and she felt shaken.

They have not met the teenager since the incident as he had to return to Malaysia. But they have been interacting with his family friend, who lives on the 16th floor of their block.

He contacted the Cordova family, who are from the Philippines, to express gratitude and appreciation from teenager's family.

The siblings' mother, Mrs Laureen Cordova, 46, said she was very proud of her children for stepping up when it mattered.

Colonel Lim Boon Hwee, Commander of the 1st SCDF Division, who presented the awards to the siblings, commended their actions.

"It was a courageous effort to pull the 16-year-old boy out. You had the calmness and composure," he said.

"This is what we want members of public to do, to learn life-saving skills such as CPR, and have the skill and self -confidence to administer them in times of need."