In sickness and health: Coronavirus patient weds after recovering

Mr Christopher Neo and Ms Claudia Chen in their rented apartment in Geylang. Mr Neo tested positive for Covid-19 in February while the couple were in the midst of preparing for their wedding the next month. They scaled down their wedding plans and got married on March 7, two weeks after Mr Neo was discharged.

Even before reciting her wedding vows in an hour-long ceremony before some 100 guests at the Aliwal Arts Centre on March 7, Ms Claudia Chen knew what it meant to love in sickness and in health.

Just two weeks earlier, her husband-to-be - Mr Christopher Neo - was in an isolation ward at the National Centre for Infectious Diseases (NCID). The 27-year-old had tested positive for Covid-19 on Feb 13, the day before their Valentine's Day dinner.

They were already in the midst of wedding preparations but Ms Chen focused on supporting him in his fight against the virus.

"I was ready to be by his side no matter what," said the 27-year-old freelance music teacher.

"I couldn't really help, except to talk to him through text and video calls. Maybe I gave him hope for a new day."

Fortunately his symptoms were mild, and Mr Neo, who was Case 57, was discharged on Feb 21 after two negative swab tests.

The couple, who have been together for five years, had to scale down and re-plan their wedding in just two weeks.

At that time, Singapore had raised its Disease Outbreak Response System Condition (Dorscon) level to orange. Some churches had already suspended their services and other activities.

What was supposed to be a church wedding with some 400 guests and a yacht party after with about 100 people, became a much smaller event with 100 of their closest family and friends on March 7. The couple had cancelled the prior bookings after Mr Neo contracted the coronavirus.

Mr Neo said: "We had planned it for almost two years. But what's important was that we could be married. There is no one else I would rather spend the rest of my life with."

Mr Neo had a mild flu, and his throat was dry and sore on Feb 11. After hearing that a colleague was suspected to have the coronavirus, he went to the NCID alone and was sent into an isolation room that night.

He was then a sound engineer at the Grace Assembly of God church, which was once the nation's largest cluster with 23 cases linked to it. 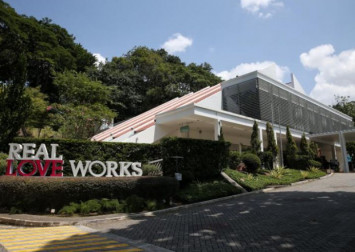 Mr Neo believes he contracted the virus from a co-worker seated across from him at a staff breakfast meeting. "The virus is a scary one. I only had mild symptoms. If I didn't seek treatment, I could have spread it to someone unknowingly," he said.

On Feb 13, he received a call on the phone in his ward. A nurse told him he had tested positive for Covid-19.

"The fear was real. Not for me, but for my family. I had a young nephew living with us, and my parents are not that young," said Mr Neo, whose nephew is just over a year old.

Mr Neo said it came as a shock as he had been cautious. "I started wearing a mask, and I wore it everywhere," stressed the middle of three children, who was then living with his family in a Senja Road flat.

"After all, my family is the dearest thing to me. Also, my wedding was coming up."

At home, his 66-year-old father, 60-year-old mother, 35-year-old sister and nephew were quarantined until Feb 24. His wife-to-be was also put on a quarantine order.

Fortunately, none of them contracted the virus.

"I was relieved," said Mr Neo, who is now living with his wife in a rented studio apartment in Geylang. "The guilt and worry were lifted from my shoulders and I could rest properly."

He was given only medicine to treat a mild flu and scratchy throat when he was discharged. 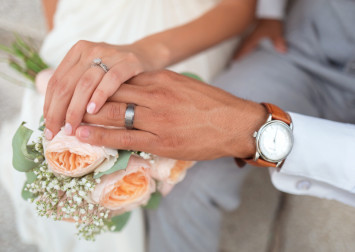 Mr Neo, who has moved on to another video production job, said he stayed in touch with his family during his stint in hospital and caught up on movies and TV shows.

Ms Chen was initially worried when she knew her then fiance had contracted the virus. "But he assured me that he was fine, so I didn't want to overthink," she added.

As for the scaled-down wedding, Ms Chen said they had informed relatives and friends about the situation and gave them the option of skipping it if they were not comfortable.

From a list of 400 guests, they narrowed it down to 100 as a precaution, said Mr Neo. To reassure their guests, they took several measures including temperature-taking at the door and compiling a list in case contact tracing had to be done.

"We had a really sweet wedding with our close ones," he said.

"And it is just one day. We still have a lifetime to make each other's day special."

Getting Covid-19 didn't stop him from saying 'I do'

Video editor Christopher Neo, 27, tested positive for Covid-19 on Feb 13, less than a month before his wedding day.

He was discharged eight days later, and he and his then fiancee Claudia Chen, 27, a freelance music teacher, scrambled to scale down their nuptials on March 7. Two months on, they share their story.