Singapore Girl: The result of the world's 'most intense' cabin crew training

A quick glance around Changi Airport and you'd find flight attendants aplenty. Yet, none are quite as impressive and timeless as our very own Singapore Girl.

Looking as immaculate as ever dressed in the iconic sarong kebaya, the Singapore Girl has become part and parcel of Singapore Airlines (SIA) — an iconic symbol of Asian hospitality. Their bonafide services are widely recognised, garnering a multitude of international awards.

Yet what exactly goes into maintaining this perfect standard? A documentary uploaded by British TV station Channel 4 titled "Does Singapore Airlines Have the Most Intense Cabin Crew Training in the World?" gives viewers an insider's look on what makes a Singapore Girl.

Or as elegantly declared in their caption: "A look behind the scenes as Singapore Airlines bid to create a whole new level of opulence for first-class travellers."

SIA claims its 14-week cabin crew training course is twice the duration of the industry standard. The short clip offers a peek at different parts of the course, and it's clear as day that the programme definitely lives up to its intense reputation.

Less than 20 seconds into the video, a trainee is corrected in a demonstration for serving a passenger with the wrong hand — just one of the many small details flight attendants have to adhere to.

To serve the premium classes, selected trainees would have to undergo additional sommelier training.

Not only do Singapore Girls have to walk, talk, and behave right, they also have to keep strict standards on their looks.

The trainees are scrutinised from head to toe by Amy Ling, the airline's grooming consultant. Ling decides how each individual trainee should look, including their makeup palette to their professional hairstyles.

Foo disclosed that the upper ranks in the cabin crew tend to have fewer females than males. The reason is simple: some women leave to start a family and men do not have to worry about shedding extra pounds gained after childbirth.

However, some netizens and critics alike asserted that the Singapore Girl icon is not only outdated but encourages sexist views — perceived to be reinforcing stereotypes of subservient Asian women.

The Singapore Girl is the most well-cited embodiment of SIA’s brand. I think it is a sexist,outdated and reinforces stereotypes of subservient ASIAN women. (2/2)

Foo explains such standards are there to meet expectations set by the customers.

In a 2017 interview with Stuff, she admitted: "It's a very figure-hugging uniform. If you don't have the right posture or if you slouch, it shows very clearly."

Another reason is out of respect to Pierre Balmain, the notable haute couture fashion designer responsible for the iconic Singapore Girl kebaya.

"We tell the girls they need to respect the uniform the wonderful Monsieur Balmain made for us. We must not make the poor man cringe when we wear his creation." 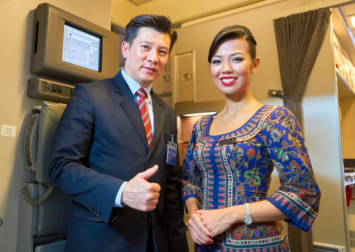 Men are not exempted from stringent scrutiny too. Not only must they be clean-shaven, their hair also must never be shorter than a Number 3 cut and never styled beyond 45 degrees. To top it off, their fingernails have to be no longer than 2mm.

All of these play a part in maintaining the airline's branding. Singapore Girls are known for their exceptional hospitality and their iconic appearance makes them instantly recognisable even to passengers who have yet to fly with the airline.

As The Straits Times once put it: "To remove the Singapore Girl icon from SIA is like removing Mickey Mouse from Disneyland."

#SIA (Singapore Airlines) #Air Stewardesses #In Case You Missed It