Singapore has hatched Plan B if Malaysia's egg supply dries up: AVA

SINGAPORE - Singapore's food watchdog has responded to warnings from Malaysia that it may stop or limit egg exports, saying that the Republic has plans in place to acquire eggs from elsewhere if need be.

Earlier this week, Malaysia's Domestic Trade and Consumer Affairs Minister Saifuddin Nasution Ismail said the country is looking into limiting or stopping the export of eggs, to ensure a sufficient supply for its domestic market.

However, the Agri-food and Veterinary Authority (AVA) said on Thursday (Dec 13) that supplies remain unaffected for now, with a spokesman adding: "Our importers are still getting their usual egg supplies from Malaysia.

"Nevertheless, in line with our overall food diversification strategy, we have a wide range of alternative sources for our eggs, including our local farms."

Approximately 73 per cent of Singapore's eggs are from Malaysia, according to the AVA, with around a quarter produced here. 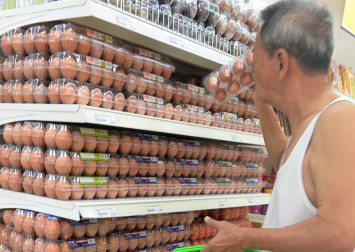 Less than 1 per cent of eggs in Singapore are imported from accredited farms in Thailand, Japan, Australia, and New Zealand.

Singapore's egg supply was previously disrupted in 2004 when the emergence of avian flu (H5N1) on a poultry farm in Kelantan resulted in the AVA imposing a ban on all poultry products from Malaysia.

At the time, Malaysia supplied two-thirds of Singapore's eggs.

Although there were alternative sources for import, these were also more expensive and caused the price of eggs to rise sharply, spiking to 70 cents per egg at one point - almost three times the usual price at the time.

However, local farms could not fully account for the entirety of the shortfall if supplies are cut off abruptly.

Mr Koh Chern Peng, manager of Seng Choon Farm, said the farm produces about 600,000 eggs a day - about 12 per cent of Singapore's daily demand for eggs.

He added that its supplies are "inelastic" and any increase to that number would take several months, said Mr Koh.

"Chickens on the farm need to grow to maturity, but it would take at least half a year to increase the number of eggs produced on the farm," he added.

In the event of a shortage, Mr Koh said the 600,000 eggs will to go Seng Choon's existing customers which include local supermarkets like NTUC FairPrice.

Alternatives to Malaysian produce, such as eggs from Australia and New Zealand, tend to be significantly more expensive.

A box of 12 cage-free Australian eggs costs $6.70 on online retailer RedMart, while a carton of 30 eggs from Pasar, a Malaysian brand stocked at FairPrice, costs $5.50.

Stallholders at wet markets in Jurong and Serangoon told the ST they are not too concerned about Malaysia's warning.

"I get my eggs from local sellers," said one stallholder at Serangoon wet market, who wanted to be known as Mr Lim. "The eggs sold in Singapore are just as good but are a bit more expensive."

Mr D. Y. Lee, who operates a stall in Jurong, said that if push came to shove, Singaporeans could get their protein from other sources.

"Eggs are tasty and cheap, but you can also eat tofu, and meat and many other things for your nutrients," Mr Lee said. "It's nice to have eggs, but we won't die without them."