Salesman Eddie Chow faced an agonising choice back in March when borders were closing - stay in Singapore and protect his job or return to Malaysia to see his dying dad.

Salesman Eddie Chow had faced an agonising choice back in March when borders were closing - stay in Singapore and protect his much-needed job or return to Malaysia to see his dying dad.

When it came to the crunch, he found he really had only one option: "Many of my friends chose to stay in Singapore so they could continue with their work. But I decided to return home to my dying father. I wanted to walk his last journey with him."

It was the low point in what had been a distressing period after the doctor had told Mr Chow, 39, that his father's cancer was at the end stage and he was nearing death.

While it was hard enough coping with the loss of his father during the pandemic, Mr Chow was also overcome by fear of losing his job in Singapore. There was a car loan and a mortgage to service and two young children to provide for.

Mr Chow started his career with Gain City as a salesman nine years ago and four years later, he was promoted to head the audio visual department. He was among around 100,000 Malaysians who commuted daily to Singapore for work before the pandemic.

Mr Chow declined to reveal his salary but said that it relied heavily on commissions and with the high exchange rate, he was able to provide for his family.

While he was back in Malaysia after the border closed, he was forced to draw on his savings to pay for household expenses.

"My wife doesn't earn much from her outdoor sales job. To supplement the household expenses, she bakes cakes to sell online," said Mr Chow. "Since I had no work, I helped to deliver the cakes. During Mother's Day, we got more orders and sold about six cakes."

He said the reopening of the Singapore-Malaysia border last Monday was like a lifeline given that his hard-earned savings were just about gone.

Mr Chow is grateful to his employer for sponsoring his return to Singapore under the Periodic Commuting Arrangement (PCA) scheme. Together with nine colleagues, Mr Chow walked across the Causeway to Singapore last Monday.

He told The Sunday Times from his Geylang hotel room, where he was serving seven days of a stay-home notice, last Thursday: "It wasn't an easy decision to make - to return to Singapore to work and not know when I can see my family again.

Read Also
Singapore-Malaysia border travel: What are the safety measures 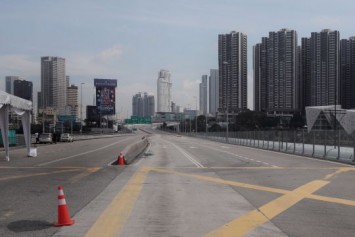 "I have been with my wife for 12 years and this is the first time that we are being separated (for so long). She is being left alone to take care of our eight-month-old son and five-year-old daughter.

"With the current rules on travelling under the PCA, I don't think I can afford to make it home to celebrate my son's first birthday with him in December. I also can't make it back for my wedding anniversary and wife's birthday.

"I told my wife no matter how much we miss each other, we have to endure this separation so that I can continue to provide for my family and our children can have a better future."