Singapore, Malaysia to join hands on several fronts in fight against coronavirus outbreak

Senior Minister of State for Transport and Health Lam Pin Min during a visit to PSA Singapore at Pasir Panjang Terminal Building 3 on Feb 12, 2020.

SINGAPORE - Singapore and Malaysia are looking into establishing protocols for the transfer of infected patients between them as part of efforts to work more closely in tackling the spread of the coronavirus.

Other areas of cooperation include the sharing of information to help with contact tracing of confirmed cases, as well as temperature screening at the borders, Senior Minister of State for Transport and Health Lam Pin Min told The Straits Times on Wednesday (Feb 12).

He is the co-chairman of a new Singapore-Malaysia joint working group tasked to strengthen cooperation in the fight against the coronavirus, which has been officially named Sars-CoV-2, with the disease it causes called Covid-19.

Speaking to ST after a visit of PSA Singapore's Pasir Panjang Terminal Building 3, he said that representatives of both countries will have further discussions on implementing temperature surveillance at the border.

Currently, Singapore conducts temperature screening for travellers entering Singapore from Malaysia. Dr Lam said the authorities are looking into whether it should be carried out on travellers going out of Singapore into Malaysia as well.

"We don't want to duplicate the efforts. If both countries can actually work together, we can make it more seamless for travellers," he added.

He added that details will be worked out after discussions with Malaysian representatives.

He said that in addition to Ministry of Health personnel, Immigration and Checkpoints Authority (ICA) officials will likely be roped in to carry out the cooperative measures.

The working group to strengthen cooperation between Singapore and Malaysia in the battle against the coronavirus was announced on Tuesday (Feb 11) after Singapore's Health Minister Gan Kim Yong and his Malaysian counterpart, Dr Dzulkefly Ahmad, spoke via a video-conference meeting. 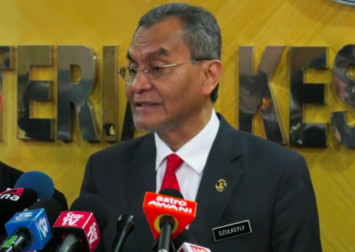 The ministers had agreed that it is important for both countries to continue working closely together on the outbreak, especially given the high volume of travel between Singapore and Malaysia.

About 415,000 travellers use the land checkpoints daily, but the figure sees an increase during festive periods such as Christmas or Chinese New Year.

During his visit to Pasir Panjang Terminal Building 3, Dr Lam was briefed on the precautionary measures taken by the port operator, which include requiring crews on board container vessels that had departed from any Chinese port in the last 14 days to not disembark at Singapore’s port.

Crews on other vessels are discouraged from disembarking. PSA personnel will help to take their temperature at the vessel gangway if they want to disembark.

Maritime and Port Authority of Singapore chief executive Quah Ley Hoon said: “The general philosophy is that we take precautions for these crews, but goods and operations continue as usual.”