People boarding a bus as part of a VTL simulation exercise at Woodlands Temporary Bus Interchange on Nov 23, 2021.

SINGAPORE - Some 4,400 bus tickets have been snapped up for quarantine-free land travel between Singapore and Johor Baru on the first day that they went on sale.

Three-quarters of the tickets were for journeys from here to Malaysia, while the rest were for trips in the other direction, the Ministry of Trade and Industry (MTI) said in response to queries.

While demand for tickets is likely to remain high, the majority of tickets for the first 30 days of the land vaccinated travel lane (VTL) — that starts next Monday (Nov 29) — are still available, it added on Thursday.

"As of 4pm today, more than 90 per cent and 70 per cent of Transtar tickets to Singapore and Malaysia respectively are still available. Transtar Travel, one of two appointed bus operators, has sold about 4,400 VTL (land) bus tickets across a 30-day timeframe," said MTI.

From next Monday, up to 1,440 Singapore citizens, permanent residents and long-term pass holders in Malaysia will be able to cross the Causeway into Singapore each day using the designated bus services.

Similarly, up to 1,440 Malaysia citizens, permanent residents and long-term pass holders in Singapore will be able to go back home, as part of an initial phase of a land VTL between the two countries.

For a start, there will be 64 daily VTL bus trips between Malaysia and Singapore, 32 in each direction, with a maximum of 45 seated passengers a trip. 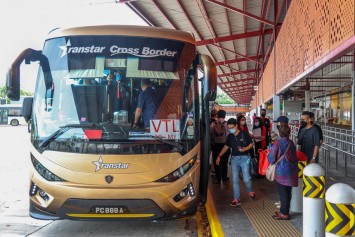 Singapore bus company Transtar will operate 16 daily trips from Larkin Sentral Bus Terminal in Johor Baru to Woodlands Temporary Bus Interchange, and another 16 in the other direction.

MTI said as at 3pm on Thursday, the Immigration and Checkpoints Authority (ICA) had received 240 Vaccinated Travel Pass (VTP) applications for the land VTL to enter Singapore.

Long-term pass holders are required to get a VTP but Singapore citizens, PRs and unvaccinated children aged 12 and below do not need one.

MTI's update on the ticket sales comes after The Straits Times reported that travellers scrambled to get tickets to Johor Baru.

Checks on the websites of the two service providers showed that virtual waiting rooms were created to deal with the high volume of traffic.

When asked how Transtar was chosen, a spokesman for the Land Transport Authority (LTA) said the company has more than 20 years of experience in operating bus services between the two countries.

"It has an online system for travellers to purchase bus tickets, operation facilities at Larkin Sentral Bus Terminal in Johor Baru and a fleet of buses that can meet our operational requirements and tight implementation timeline of the service on Nov 29," added the spokesman.

The announcement of the the land VTL has been lauded by several companies here. For Hegen, which sells bottles and breast pumps, at least 30 per cent of its employees are Malaysians who are Singapore PRs or work pass holders.

"Hegen is prepared to allow its employees to return home for a period of time. For those who may need an extended period of time, Hegen will facilitate accordingly for their family reunions," said its spokesman.