The passengers screamed as the bus ploughed into the back of a truck.

When it finally came to a stop, the back of the truck had been crunched to where the first five rows on the left side of the bus were supposed to be.

But when the passengers tried to get off the wreck, they could not open the front and rear doors or the emergency hatch.

Madam Zheng Wen Shan, a 39-year-old accountant who was trapped in the bus with her family of four and their maid, said they then grabbed a fire extinguisher and smashed a window to escape.

"There was a strong smell of gasoline and I was afraid that the bus would explode at any moment," she recounted the incident to Chinese daily Shin Min Daily News.

"We let the children get out first before escaping ourselves."

The accident happened at about 2.30am on Sunday, when a coach carrying 25 passengers and two drivers crashed into a hauler truck on the North-South Highway in Malaysia. Three people died and 14 were hurt in the bus crash in Malaysia. Photo: China Press

The crash killed three people, including a Singapore permanent resident who has been identified as Ms Lai Moon Ching, 25.

Fourteen others, including Madam Zheng's family and their maid, were injured. 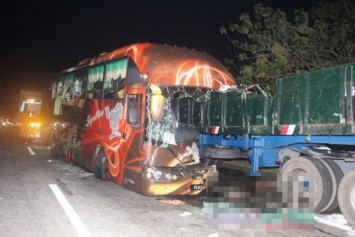 The coach, operated by Singapore's Grassland Express and Tours, was en route from Kuala Lumpur to Singapore.

Madam Zheng said her family, including her nine-year-old son and seven-year-old daughter, had gone to Ipoh to visit her family on Aug 31.

They intended to return to Singapore last Friday but were unable to get tickets.

They then took the ill-fated bus on Saturday night.

Mr Tan Boon Huat, the director of Grassland Express and Tours, drove Madam Zheng's family back to Singapore after the accident.

Speaking to Shin Min, he said the accident was a tragedy that will haunt him.

"My goal is to give each passenger a safe and comfortable journey, but the accident has torn several families apart," he said. "I feel guilty. This is an eternal stain on my conscience."

The bus driver, identified as 54-year-old Zamris Abdul Aziz, has been arrested and is still in the custody of Malaysian authorities. Investigations are ongoing.