Singapore not invited to summit because US doesn't see it as a democracy: Tommy Koh

SINGAPORE - Singapore was not invited to a 110-nation democracy summit convened by the United States because its Democratic Party has never accepted the Republic as a democracy, said Ambassador-at-Large Tommy Koh on Thursday (Dec 9).

His remarks, made at the launch of a Straits Times Press book on the US through a Singapore perspective, sparked off-the-cuff comments from fellow foreign policy veterans Bilahari Kausikan and Chan Heng Chee, who were in the audience. They criticised the city-state's omission as a political move and the summit's premise divisive to begin with.

The virtual confab on Thursday and Friday, billed as a US-led push to promote more free and open societies, has drawn flak from China and Russia, who have also been left off the guest list.

They are viewed by Washington as autocracies and dictatorships on the other side of a battle faced by democracies around the world.

Yet the US is facing a challenge to democracy within its own borders, with former president Donald Trump's refusal to recognise the 2020 election loss leading to his supporters storming Congress in January, an event the country is still reeling from.

US Embassy deputy chief of mission Rafik Mansour, who was guest of honour at the book launch, acknowledged that "projecting democracy globally also starts at home".

Read Also
Singapore’s non-invite to democracy summit ‘not a judgment’: US 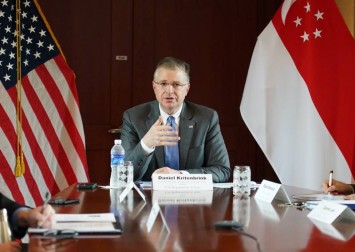 "We wanted to get together with some nations not to point blame, but to share experiences, because democracy is tough and hard work," he said of the summit.

Pressed by Professor Koh on why Singapore was not invited, Mr Mansour reiterated points made last week by US Assistant Secretary of State for East Asian and Pacific Affairs Daniel Kritenbrink, who said there was a limited number of invites and that the decision did not reflect on the depth and breadth of the US' relationship and partnership with Singapore. "We have a lot to learn from Singapore," said Mr Mansour.

Mr Kausikan, a retired diplomat who was formerly permanent representative to the United Nations in New York, then commented audibly from the floor that the US had done Singapore "a big favour" by not inviting the Republic.

Prof Koh, however, said Singapore should have been invited because it satisfies what he felt to be fundamental criteria for a democracy — including giving people the right to vote, holding free and fair elections at regular intervals and having a Constitution protecting fundamental freedoms and rights, as well as an independent judiciary and rule of law.

Noting that there was no single model for democracy, Prof Koh added that perhaps in the eyes of the US' Democratic Party, Singapore-style democracy with its many unique Singapore characteristics was not a true democracy.

Also in the audience was Professor Chan, Singapore's ambassador to the US from 1996 to 2012, who said the summit was plainly not a good idea and that some of the invited countries were eyebrow-raising choices.

The US has voiced opposition to the purported human rights abuses of China and Russia. However, countries like Pakistan and Brazil, while singled out for similar criticism, have been invited.

Prof Koh said it was necessary to understand the US' commitment to promoting democracy, human rights and individual liberties.

"Many Americans feel that it's almost their divine mission," he added.

Mr Kausikan, this time given a microphone, said he did not disagree with Prof Koh.

"Americans, bless their souls, go through these fits periodically," he concluded. "And those of us who know them, still love them despite these fits."