National Geographic photographer Stefano Unterthiner, 48, from Italy has been to more than 30 countries and photographed exotic wildlife such as the Komodo dragon, European bison and brown bear.

When he learnt about Singapore's Bishan otters, he flew here in January last year for over three weeks.

He is not the only foreigner to be intrigued by our otters.

Otter groups here told The New Paper that they get messages from fans across the globe asking where to find the animals if they were to visit Singapore.

There are two species of otters here - the smooth-coated and the small-clawed otters.

The smooth-coated ones grow up to about a metre long and weigh about 11kg. They are the more common ones and have been spotted since the 90s in places such as Sungei Buloh, Bishan-Ang Mo Kio Park and Gardens by the Bay. 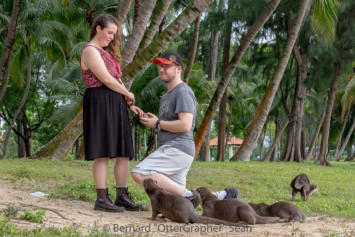 Small-clawed otters weigh around 5kg each and have been seen on offshore islands such as Pulau Tekong and Pulau Ubin in recent decades.

Otters have been reported in the media attacking fish ponds in Sentosa Cove or on the tarmac at Changi Airport.

Mr Unterthiner has been a regular contributing photographer for National Geographic Magazine for the past decade. He told TNP in an e-mail interview that he had always dreamt of working with otters.

He said: "My work is telling the life stories of animals, and I am always looking for new and interesting stories... The return of otters in Singapore is an amazing example of co-habitation between people and wildlife.

"It is a positive story to tell and share, full of hope. I never expected to do it in the heart of a metropolis."

Mr Unterthiner went out twice a day, in the early morning and late afternoon, for 21 consecutive days to follow the otters. He mainly photographed the ones in Bishan.

He cycled more than 300km and rarely took a break.

"I was totally exhausted when I finished," he said.

Mr Unterthiner shot about 10,000 images of the otters and saved about 4,500 after editing.

Some of the photos can be seen in the online version of this TNP article and were published in French nature magazine Terre Sauvage on Jan 2.

Mr Unterthiner spent months planning the trip and received help from Ottercity and OtterWatch, a platform that consolidates otter sightings in Singapore since 2009. 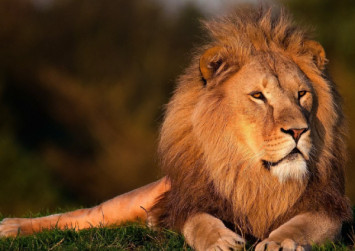 In July 2016, the otters were greeted by researchers and scientists from around the world when Singapore hosted the 13th International Otter Congress.

Veteran otter watcher and founder of Ottercity, Mr Jeffrey Teo, 47, told TNP: "The otters represent the biodiversity success that Singapore has developed over the years, and many people are interested to see them for themselves."

Ottercity was created last June as a platform to share original collections of otter stories, pictures and videos in Singapore. It has more than 9,000 Facebook followers.

OtterWatch has over 40,000 Facebook followers, with fans from Ireland, Italy and Russia.

Some come from countries such as Japan, Britain, Australia, Taiwan and the US.

Mr Teo said: "They usually ask how and where they can find the otters if they were to come to Singapore."

National University of Singapore biology lecturer N. Sivasothi, who heads the OtterWatch group, told TNP: "The otters are gaining so much recognition worldwide because it is an unusual phenomenon to see these wildlife creatures thriving in an urban city like Singapore.

"Many people are intrigued to see these otters roaming around with Marina Bay as the backdrop."

He added the Singapore otters are easier to track and spot compared with otters overseas.

Mr Sivasothi said the otters gained popularity in 2014 when they were spotted in the Marina Bay area and then Minister for National Development Khaw Boon Wan made a blog post about it. 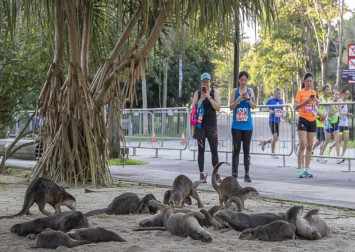 "It is really heart-warming to see locals and even people from overseas appreciating these otters," he added.

It should be capitalised on as it represents a rather compelling branding opportunity in the spirit of the Uniquely Singapore campaign.

He told TNP: "It is important to acknowledge the potential extent of uniqueness of relying on wildlife otters as a branding tactic remains an open question.

"Particularly given the fact that otters are found pretty much all over the world."

He said organisations have successfully relied on animal mascots and characters in their communications for hundreds of years and the otters can be turned into Singapore's mascot to attract more tourists.

Furthermore, the juxtaposition between the wildlife mammals and Singapore's urban city portrays a unique visualisation of the country that foreigners would be intrigued by.

His colleague, business lecturer Wong King Yin, added: "Whether it is a wise move for Singapore to take advantage of the otters' publicity depends on whether the otters can help deliver a brand image and message that the Singapore brand intends to build and convey."