The 44-year-old permanent resident developed symptoms while she was serving her Stay-Home Notice.

SINGAPORE - One imported case was among the coronavirus patients announced in Singapore on Tuesday (June 30), said the Ministry of Health (MOH).

The patient, a 44-year-old permanent resident, returned to Singapore from India on June 24.

She was placed on stay-home notice (SHN) upon arrival and had been ferried in a dedicated transport to an SHN facility to start her 14-day isolation. She developed symptoms during SHN, said MOH.

It is the first imported case since June 14, when a Bangladeshi man who came to Singapore to seek medical treatment that was not related to Covid-19 later tested positive for the coronavirus.

The woman was initially counted as a community case on Tuesday afternoon but later reclassified on Tuesday night as an imported one by MOH.

Among the two Singaporean patients, one was detected by the ministry's proactive surveillance of persons deployed to front-line Covid-19 operations, even though he is asymptomatic.

Epidemiological investigations are ongoing for the other Singaporean patient.

Among the three work permit holders, two had been swabbed as part of proactive screening of workers in essential services. The remaining case is asymptomatic and had been tested as he works in front-line Covid-19 operations.

Two of the five community cases are likely to be cases of past infections and are no longer infectious, the MOH said.

Meanwhile, four new places were added to the list visited by Covid-19 patients while they were still infectious.

Those who were there at the time the patients visited should monitor their health closely for two weeks from the date of their visit.

Read Also
Coronavirus Singapore: 100 to 1,000 infections in 1 month. What happened? 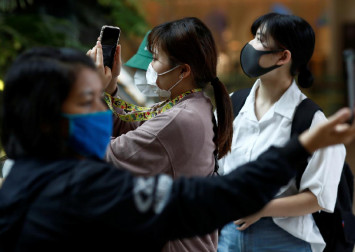 The ministry provides the list of locations that Covid-19 patients have visited for more than 30 minutes to get those who were at these places to monitor their health closely for two weeks from the date of their visit.

It has said that close contacts would already have been notified and that there is no need to avoid these places as they would have been cleaned if needed.

The MOH also announced a new cluster in a dormitory at 20 Senoko Crescent.

With 515 cases discharged on Tuesday, 38,488 patients have fully recovered from the disease.

A total of 215 patients remain in hospital, including one in the intensive care unit, while 5,166 are recuperating in community facilities.

Singapore has had 26 deaths from Covid-19 complications, while 12 who tested positive have died of other causes.