SINGAPORE - Singapore has remained unaffected by the chemical spill incident in Johor's Pasir Gudang district, the authorities said on Sunday (March 17), with continued close monitoring of the Republic's air, water and seawater.

The Singapore authorities are also getting regular updates of the situation in Pasir Gudang from their counterparts, said a joint statement by the Agri-Food & Veterinary Authority of Singapore (AVA), National Environment Agency (NEA), Singapore's National Water Agency PUB and the Singapore Civil Defence Force (SCDF).

The concerns in Singapore followed the dumping of toxic waste in a river in Pasir Gudang that has sickened more than 3,000 people in surrounding areas and caused 111 schools to be shut since last Wednesday.

Seven victims remained in intensive care on Sunday, after inhaling toxic fumes from the chemical waste that flowed downstream to their schools and homes. 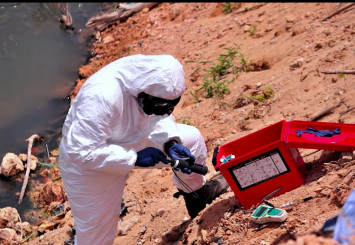 Waters from Sungai Kim Kim discharge into the Strait of Johor north of Pulau Ubin.

Malaysian authorities said on Sunday that the cleanup of the 1.5km polluted stretch of the river was complete, with 1,250 tonnes of soil, water and sludge removed.

In the joint statement, the Singapore authorities said: "So far, our air and water quality remain safe, and our water supply is unaffected by the incident.

"A portable stand-off chemical gas detector deployed by the SCDF at Punggol has not detected any signs of harmful substances," it said.

In addition, the NEA monitors ambient levels of volatile organic compounds (VOCs) such as benzene, at various locations in Singapore, including Pulau Ubin.

"The ambient levels of VOCs in the north-eastern region remain within safe levels."

Singapore's 24-hour Pollutant Standards Index (PSI) since March 6, when the toxic dump was first found, has been in the good to low-moderate range, the statement said.

The one-hour PM2.5 readings have remained normal, it added.

"While NEA has received feedback on smells over the past few days from about a dozen members of public daily, these are not from any particular region of Singapore," the statement said.

NEA shares the results of its water sampling with the Agri-Food & Veterinary Authority of Singapore (AVA). This allows for swift action to be taken in the event of any sign of pollution. Meanwhile, the AVA has been working closely with fish farms located north of Pulau Ubin to update them of the current situation.

"So far, AVA's tests of seafood samples from these farms have not detected any anomalies."

PUB has been closely monitoring water quality along the Johor River and our local waterways and reservoirs.

"The water quality of our inland waterways and reservoirs in north and north-eastern Singapore is also unaffected."