SINGAPORE - Singapore said on Monday it was seeking to extradite a Canadian man suspected of a rare bank robbery in the city-state, after he was detained by authorities in Britain last week.

The suspect, David James Roach, allegedly stole $30,000 from a Standard Chartered bank branch in July 2016, before fleeing to Thailand where he was arrested.

After serving a prison sentence for criminal offences in Thailand, Roach was deported and arrived in London on Jan. 11, where he was detained by British authorities, Singapore's Attorney General's Chambers and the Ministry of Home Affairs said in a statement.

"We sought the assistance of the UK authorities to arrest Roach, with a view to his eventual extradition to Singapore," they said. 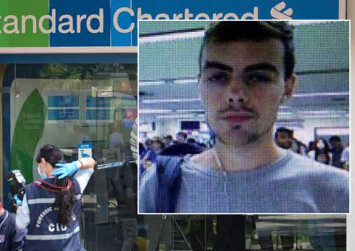 "We are working with the UK authorities to commence the extradition proceedings." The rare bank robbery in Singapore sparked a flurry of debate about whether the country has grown too complacent about security.

A senior official in Thailand's Immigration Bureau, Major General Choochat Thareechat, said Roach had been deported last week, but to Canada, not to Britain.

He declined to comment when asked about Roach's travel arrangements after leaving Thailand.