'Singapore is still my home' 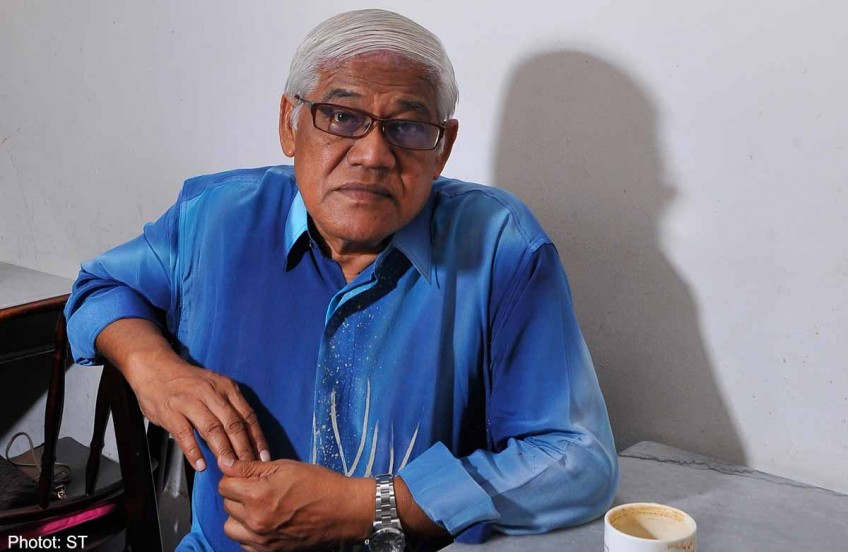 "I feel very sad, no words to describe it," the 65-year-old says when we meet at a coffee shop near his Woodlands home, speaking in a mix of English and Malay, the latter interpreted by one of his students.

"My elder son is in Melbourne, he's been persuading me to go over for 15 years. I want to be with him and my grand-daughter. But this is my country. I can't really describe how I feel."

Latiff is one of Singapore's most established and respected writers in Malay and won the biennial Singapore Literature Prize three times in a row from 2004 to 2008.

He has written more than a dozen works of poetry and fiction in Malay and is known for his outspoken writing about the Malay community, starting with the controversial 1977 novel Kota Air Mata. It is the tragic tale of a young, impoverished Malay woman ultimately driven to suicide, which is a mortal sin.

Readers in English have begun to discover him, thanks to Confrontation (inset below), a 2013 translation of his novel, Batas Langit (1996), from Epigram Books.

The publisher is also releasing in late May a translation of Latiff's novel about love, Ziarah Cinta (1998), tentatively titled The Widower.

Confrontation is the story of a young kampung dweller in the 1960s whose world changes because of the proposed merger of Singapore and Malaysia. It captures the struggle to survive in those days and the rifts and links between different communities.

Long looked down on for being Malay, the protagonist Adi finds himself suddenly fashionable during the days when merger is in the air and speaking Malay is a passport to a white-collar, financially secure future - a future that never materialised and echoes some of Latiff's own experiences.

His labourer father and midwife mother sent him, but not his two sisters, to Guillemard Malay School, then Tun Seri Lanang Secondary School and Kaki Bukit Secondary School. Later, he went to the then Teacher Training College and was a specialist writer of Malay-language materials with the Curriculum Development Institute of Singapore. Married by then to a housewife, and father to two sons, he left in 1999 to concentrate on writing full-time.

"They sent me to Malay school for what?" he says of his late parents. "If they had sent me to an English school, I would have been a lawyer, a doctor, an engineer. Studying in Malay, I could become what, a postman? I decided to become a writer instead."

Though joking, there is a thread of real disappointment in his words. He has pushed his children towards higher education - his older son is an educational specialist who works with tuition chain Kumon in Australia, while his younger son just completed his master's in sociology.

Later, the author speaks of the late writer Masuri S.N., who advised him to always find humour in any situation.

"He said: 'Latiff, as writers we are always thinking of difficult things. If we don't joke, we'll die of a heart attack.'" Latiff, too, mentors many younger writers through the Malay literary association Angkatan Sasterawan '50 and confesses to feeling somewhat nervous about starting again in Melbourne.

"There's a Malay community there, a radio station, I can help them promote the culture," he says at one point. "I also want to research and write about the aborigines. Their history is very like the Malays, being colonised, being made use of and tricked in many ways."

He speaks passionately and angrily about the loss of Malay identity because of colonisation and denounces what he sees as an entrenched refusal in Singapore, on the part of some organisations, to allow Muslim employees to wear the tudung headscarf in the workplace. Yet his feeling for the country is undeniable as he talks of the need to keep Singapore writing in Malay strong and relevant to silence external critics.

"In Malaysia, the critics say Singapore's writing died with independence. I write to prove them wrong, to show we are not bodoh, not stupid."

Writing is what he enjoys most and he writes with pen and paper, composing poems in two hours at Changi Airport, for example, before handing them over to a protege to type.

He recalls a secondary schoolteacher who told his class to aim at more than "just work, sleep, eat and marriage, do something good with your lives".

Reading the stirring works of Indonesian author and anti-imperialist Pramoedya Anantya Toer also inspired him to fall in love with words.

"If you read his works, you'll become like me," he says.

He is working on a sequel to Confrontation and has drafted 50 chapters, most of which he will write in Australia. He hopes to come up with a novel a year from now on.

"Tell everyone I'll continue writing and my love for Singapore will never end," he says.

"I love Singapore very much, but I want to stay in Australia for five, 10 years. Maybe my style of writing will change.

"In Singapore, I was mostly very tense. Was that good for me, did it give me inspiration? I don't know."