More than half of this year's perfect scorers - 133 out of 238 - came from Singapore. Ever since it joined the two-year pre-university programme in 2005, the Republic has consistently produced more than half of the top scorers worldwide at the IB's November exam sitting.

The Switzerland-based IB Organisation, which conducts the exams, said that 1,062 students in Singapore attained scores of 40 and above.

A total of 18 schools in Singapore sat the IB diploma examinations in November. This includes the international school arms of ACS, SJI and Hwa Chong.

All 156 Sota students who took the IB examinations last year passed, with those in the diploma programme obtaining an average score of 41.1 points. More than half of them scored 42 points and above.

SJI principal Justin Arul Pierre said: "The Class of 2021 has demonstrated how resilience, determination, effort and great faith in their ability to overcome challenges can produce good results, despite the various disruptions brought about by the Covid-19 pandemic.

"We have witnessed the hard work put in by the students from this cohort, many of whom have attained exceptional results despite their heavy commitments in various national competitions and student leadership responsibilities."

Hwa Chong International School reported a 100 per cent pass rate, with an average score of 39.6. Six students scored a perfect 45, and 51.7 per cent of the cohort attained scores of 40 and above. 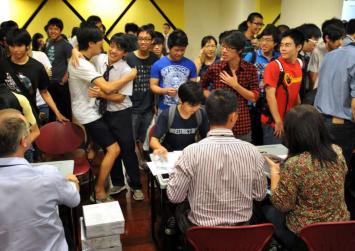 ACS (International) also recorded full passes, with an average score of 39.17. Nearly half of its 167 IB diploma students had scores of 40 or more, and seven students attained perfect scores of 45.

Globally, over 16,800 students took the IB exams last November, including nearly 6,300 students in the Asia-Pacific region.

In a statement, Mr Olli-Pekka Heinonen, director-general of the IB, said: "The last couple of years have been incredibly challenging for our students, teachers and schools."

He said that IB students in Singapore have shown resilience, adaptability and commitment during the course of their examinations.

"The IB is deeply grateful to educators who have supported our students along the way throughout their learner journey. The dedication that Singaporean teachers have shown is inspiring, and I'm incredibly proud and honoured to see our nation's young people being guided by mentors that share the IB's mission of education for a better world," he added.

Due to disruptions caused by the Covid-19 pandemic, the IB had given schools assessment options for their students, including written examinations if they could be administered safely and an alternative route using coursework and predicted grades.

"The IB has ensured that student grades are fair, valid and comparable irrespective of whether their school was able to run examinations or not," said the organisation.