KL asserts port limits are within its waters, objects to new flight procedures for Seletar

Singapore told Malaysia on Wednesday (Dec 5) to stop its "provocative intrusions" into the Republic's territorial waters off Tuas as the disagreements between the two countries appeared to sharpen.

In turn, Malaysia lodged two protest notes with Singapore, objecting to the new flight procedures that will be implemented for Seletar Airport next month and asserting that the new Johor Baru port limits were within its own territorial waters - a claim that Singapore had rejected earlier.

Foreign Minister Vivian Balakrishnan outlined Singapore's stance in a phone call to his Malaysian counterpart Saifuddin Abdullah, and stressed that there was an urgent need to avoid escalating tensions on the ground and to comply with international law, Singapore's Ministry of Foreign Affairs (MFA) said in a statement.

These developments came a day after simmering disputes between Singapore and Malaysia over territorial waters and airspace management came to light.

Neither side took a step back on Wednesday. Malaysian Transport Minister Anthony Loke said Singapore's claims that the new Johor Baru port limits encroached into Singapore waters were inaccurate. 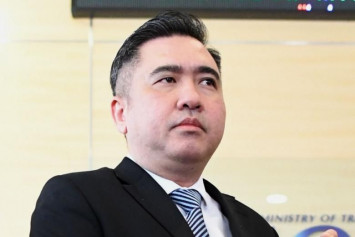 Malaysian Prime Minister Mahathir Mohamad also said that Malaysia was still within its own waters with the extension.

Refuting this, the Ministry of Transport (MOT) said that Singapore's territorial waters extend westward of its current port limits around Tuas.

"Accordingly, the purported extension of the Johor Baru port limits encroaches into Singapore's territorial waters in the area and is a serious violation of Singapore's sovereignty and international law," the MOT spokesman added.

The extension, first published in a Malaysian government gazette on Oct 25, has resulted in vessels from the Malaysian Maritime Enforcement Agency and Marine Department Malaysia making repeated incursions into Singapore's waters over the past two weeks.

In his call to Datuk Saifuddin yesterday, Dr Balakrishnan said this "series of provocative intrusions" by Malaysian government vessels has taken place despite Singapore's diplomatic protests.

The MFA said Dr Balakrishnan also told his counterpart that the Johor Baru port limit now "extends beyond even the limits of Malaysia's territorial sea claim in the area, as set out in Malaysia's own 1979 map, which Singapore has never accepted".

This 1979 map showed that Pedra Branca fell under Malaysia's territory, which Singapore had protested against. In a 2008 ruling, the International Court of Justice awarded the island to Singapore. 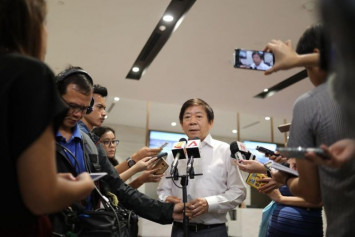 During his call to Mr Saifuddin, Dr Balakrishnan also touched on the discussions on airspace issues between Transport Minister Khaw Boon Wan and Mr Loke.

Emphasising that Singapore respected Malaysia's sovereignty, Dr Balakrishnan also told Mr Saifuddin that it was in the "interest of both countries to ensure the safety of civil aviation over our skies".

This meant ensuring that the safety and efficiency of civilian air traffic was not compromised and was in line with International Civil Aviation Organisation processes, he stressed.

Dr Balakrishnan also told his counterpart "that Singapore and Malaysia should continue to discuss these issues constructively".