Singapore warns on Covid-19 vaccine supplies as it expands programme

A nurse prepares to vaccinate healthcare workers at Gleneagles hospital, during the coronavirus disease (Covid-19) outbreak, in Singapore, on Jan 19, 2021.

Singapore still expects to complete its Covid-19 inoculation programme by the end of the year, the health minister said on Tuesday (May 11) though the city-state is also looking to secure more sources of vaccines as global supplies become more stretched.

As of Sunday, 1.8 million people in Singapore had received at least one dose of the vaccine, or nearly a third of the population. About 1.2 million people have completed the full two-dose vaccination regimen, Gan Kim Yong told parliament.

Singapore has one of the fastest vaccinations drives in Asia, but it lags some Western countries such as the United States and the United Kingdom, according to a Reuters tracker.

"Global supplies of vaccines are limited, and not just the quantity but also logistics are challenging, and therefore we need to do what we can to expand and diversify our sources," Gan said.

Singapore has been using the Pfizer-BioNTech, (22UAy.DE) and Moderna vaccines, and has taken delivery of 200,000 doses of the vaccine developed by China's Sinovac Biotech, which has yet to be granted approval by Singapore authorities.

Singapore has been looking at alternatives and had "entered into advance purchasing agreements", said Gan, who said he was unable to give details due to confidentiality clauses.

Singapore's health authority has previously said it was holding talks with AstraZeneca.

Still, if supplies arrived as scheduled, Singapore would complete its inoculation programme by the end of the year, he said. 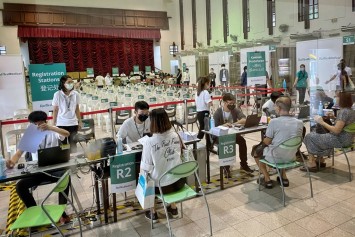 Singapore was also making plans for booster shots later this year or early next year, if necessary.

Singapore has been vaccinating those aged 45 years and older, but will invite younger people to receive shots from the second half of May.

The country has seen a rise in infections in recent weeks, along with locally acquired cases of coronavirus variants, prompting tightened curbs on social gatherings and stricter border measures.

Though only a fraction of the cases being reported among Singapore's Southeast Asian neighbours, a jump in infections would be a setback for the Asian business hub, which has successfully contained its earlier outbreaks.