SINGAPORE - Among the various challenges facing Singapore, the ongoing US-China trade war was foremost on the minds of many participants at a public forum held on Saturday (Aug 24).

But it is no longer just a trade row, said Trade and Industry Minister Chan Chun Sing, who chaired the session, and there are many competing interests between the two powers - such as in technology and currency - which Singapore is keeping an eye on.

"We are concerned with how the global trading system, the global digital economic system is coming together, or is being fragmented," Mr Chan said at a dialogue organised by Government feedback unit Reach and Singapore Press Holdings' Chinese broadsheet Lianhe Zaobao.

"Because for Singapore, we need to make preparations for the worst case scenario whereby if the world fragments - be it in the trade, production, or digital space- we will have to ask ourselves, how can we overcome these challenges and play a constructive role, a positive part in this," he added.

Read Also
Singapore will continue not to take sides between US and China, says PM Lee Hsien Loong 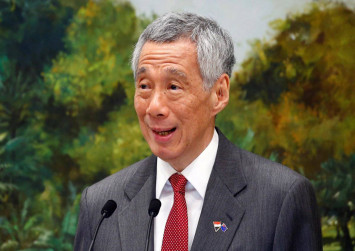 The dialogue, held at the Asian Civilisations Museum and attended by about 150 participants, was part of Reach's efforts to gather public feedback on the recent National Day Rally.

During the two and a half hour session, participants had small group discussions, and got to pose their concerns and questions to Mr Chan and Reach chairman Sam Tan, who is also Minister of State for Foreign Affairs and Social and Family Development.

About four of the 12 discussion groups highlighted the US-China tensions - an area also addressed by Prime Minister Lee Hsien Loong in his rally speech in Mandarin a week ago.

Their feedback comes as President Donald Trump has declared he will raise American tariffs further on all Chinese imports, in retaliation for China announcing added tariffs on American goods.

Mr Chan told reporters after the dialogue that while many participants saw the trade war as a challenge, there were others who saw it as an opportunity for Singapore to position itself, carefully, to ride the waves of change.

He said he was encouraged by this enterprising spirit, which was demonstrated in other areas of Saturday's discussion, such as in climate change and energy usage.

He said it was also encouraging that participants understood that the way economic resources are distributed in Singapore is a demonstration of its value system.

"One, we will always give priority to take care of our weakest, our oldest and our youngest. That is a testimony of the kind of values and social compact we have in Singapore, and it is something that we can be proud of," he said.

The second, Mr Chan said, is that a long-term perspective is taken to tackling the challenges, from climate change to taking care of the elderly. "We must make sure that we leave behind a better system, a stronger system, for the next generation to pin their dreams upon," he said.

Participants also talked about the protests in Hong Kong. Mr Chan said: "We all wish Hong Kong well. We all wish they can resolve their differences.

"But are also many lessons to be learned. And I think from Singapore's perspective, our stance is that we should not be complacent, because some of the mistakes made in organising their society in their policies could easily happen to Singapore, if we are not careful.

"But most importantly, as many of them (the participants) said, is how we build that nexus between the people and the government so that we solve problems together, we overcome challenges together," Mr Chan added.

Hwa Chong Institution student Law Yu Xiang, 15, one of the participants, said: "The dialogue helped me better understand the perspectives of others, who are from different age groups and segments of society."