The survey found that those who feel strongly about having flexibility in how they work are inclined to find a new job.

SINGAPORE- Whether it is work from home or return to the office - and for how many or on which days - Singapore workers would like employers to listen, communicate and adjust new work arrangements to suit their preferences.

And if employers insist that they trot into the office on most days, those who feel strongly about having flexibility in how they work are inclined to find a new job.

The findings, released on Monday (April 25) by the Institute of Policy Studies, reveal how workers' feelings towards their work routines have shifted towards autonomy amid the pandemic.

The study was done over nine months, tracking respondents from July last year.

The results reinforced calls from the tripartite grouping of the Government, unions and employers, which last week urged employers to make flexi-work arrangements permanent.

From Tuesday (April 26), companies can recall 100 per cent of their staff back to the office, up from the current 75 per cent, as Singapore further relaxes its Covid-19 safe management measures.

Dr Mathew Mathews, who led the study, said: "The big story that we want to tell is really that Singapore has made some kind of transition towards living with Covid-19… Some of the gains that we have got through learning to work from home in a productive manner need to be kept in mind as we think about how to get back to work."

The pandemic showed that workers not only remain productive off-site by working from home, they also get more out of their personal lives, said the research team, which also includes Ms Fiona Phoa, Dr Mike Hou and Ms Elizabeth Lim.

The survey tracked more than 2,000 respondents drawn from an online panel from technology company Toluna.

About 500 respondents were polled every two weeks over 19 fortnights to track shifts in attitudes.

A follow-up report may be released next year, Dr Mathews said.

The number of workers going into the office surged from more than half during the earlier phase of the survey to 74 per cent in the first 10 days of April, as the Government gradually lifted caps on workers on-site.

Not that all of them wanted to, though. Around one third of those who worked from home said they felt pressured to return to the office, the report said.

More women (73 per cent) than men (66 per cent) felt that home-working or flexi-work should remain the norm. More women (94 per cent) with children or caring for aged dependents at home felt so compared with their male counterparts (86 per cent), mirroring global studies that show women tended to shoulder more of the domestic burdens during pandemic lockdowns.

"This is very punishing for mothers, who really thrive on FWA to help them manage work and family. I have been seeing firms cancel their FWA quite quickly - so we saw more mums coming forward to say they are looking for new jobs with more flexibility again," she added.

Read Also
'Win-win situation for employers and employees': Flexible work arrangement requests must be considered by businesses by 2024 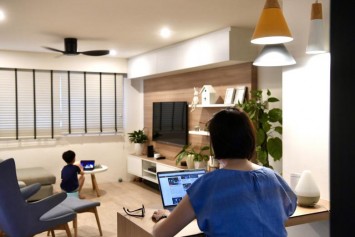 Dr Matthews said: "We found that different groups had different kinds of situations that need to be taken into account. Employers should take feedback, really understand their workers."

Workstyle consultant Hardeep Matharu said about one-third of his C-suite clients are asking their staff to return to the office unilaterally.

"For the most part, the senior leadership is seeking to maintain the longstanding status quo of the organisations they manage; working in the office was a norm for the very large majority of their tenure.

"A number of senior leaders also remain unconvinced about the viability of hybrid working, feeling that the model hinders productivity, forces an increase in unproductive virtual meetings and prompts a lack of visibility on what their teams are doing.

"As such, an easy solution is to force employees back to the office regardless of what workers want."

When his clients do so, he reminds them of the consequences.

"There are very real risks of not just losing top talent, but also reducing their ability to attract talent,'' he added.