Two Singaporean Airbnb hosts were Tuesday fined $60,000 each for letting out apartments without official permission, the first such case in the city-state under new rules against short-term rentals.

Prosecutors said the pair had listed the apartments on Airbnb, which allows homeowners to share their homes for a fee by marketing them online, and other vacation rental sites.

The duo made $19,000 from renting the apartments between May 15 and June 21 last year, according to court documents.

They were charged under regulations introduced last May banning homeowners from leasing property for less than three months without approval from authorities. 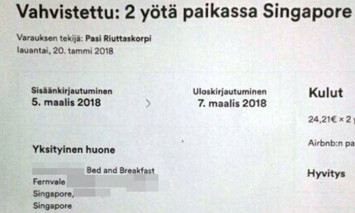 Housing is a sensitive issue in rich but land-starved Singapore because more than 80 per cent of the population lives in government-subsidised properties.

When the men were first charged, an Airbnb spokesman said rules in the city-state do not reflect how Singaporeans use their homes and travel, and the company hoped to work with local authorities to find a way forward.

Airbnb has become a popular and often cheaper alternative to hotels for many travellers.

But the company has faced mounting criticism that it worsens housing shortages and squeezes the long-term rental sector, with cities including New York, Miami and Berlin cracking down on the service.

In central Paris, rentals are limited to 120 days a year and apartments must be registered with city authorities. A similar limit applies in London.