Indonesian policeman wave back gathered onlookers following an explosion at the home of a suspected militant in Sibolga on Sumatra island early on March 13, 2019.

MANILA - At least 20 terrorists, including two leaders of the Islamic State in Iraq and Syria-inspired Bangsamoro Islamic Freedom Fighters (BIFF) and a Singaporean bomber, were killed in bombardment and a ground assault on a BIFF lair in the Philippine province of Maguindanao, the military said on Tuesday.

Major General Cirilito Sobejana said remnants of the BIFF are still resisting government troops aiming to occupy a terrorist camp in the area.

On Monday morning, military aircraft and howitzers bombed the BIFF lair, where about 120 BIFF men were consolidating and planning attacks.

The bombardment was followed by a ground assault, leading to skirmishes.

"We are still validating the figure but some of them are high-value targets or high-value individuals," ABS-CBN quoted Maj Gen Sobejana as saying. 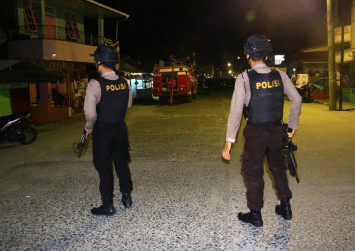 He said one soldier was killed and seven others were wounded in the attack.

Meanwhile, in Indonesia, the wife and son of a suspected militant Islamist blew themselves up in their home on the island of Sumatra early yesterday.

They killed themselves after hours of tense negotiations with counter-terrorism officers, authorities said.

Reuters reported that police and bomb squad officers had surrounded the house in Sibolga, North Sumatra, after arresting her husband a day earlier over his suspected links to a planned attack on a local police headquarters.

The wife and child had remained in the house.

"Police, religious figures and relatives of the suspect were negotiating with the suspects and asked them to surrender but they still stayed inside," said national police spokesman Dedi Prasetyo.

During a stand-off lasting nearly 12 hours, the wife allegedly threw an explosive device at the security forces, wounding a police officer and a civilian.

"At 1.25am the wife of the terrorist and their son blew themselves up inside the house," Mr Prasetyo said, adding the force of the explosion sent debris flying at least a block away.

Police found about 30kg of explosives at the site, according to media reports.

They did not give the age of the son.

Authorities believe the husband is part of Jemaah Ansharut Daulah, the largest Islamic State in Iraq and Syria-linked group in the country.

It was disbanded last year for "conducting terrorism" and affiliating itself with the foreign militant organisation.