A video of an accident at Port Dickson, Malaysia, on Wednesday afternoon (Jan 3) which killed four Singaporeans has surfaced online, showing a lorry speeding through the intersection before crashing into other vehicles.

The accident which involved five vehicles - a Singapore register Honda Stream, a tipper truck, a Mercedes-Benz SUV, a Perodua Myvi and a motorcycle -happened at a T-junction in Jalan Lukut Sepang, at around 2.30pm.

Videos of the accident have since been circulating on social media.

One of the video shows the tipper truck speeding through the intersection, and ploughing into the Honda, along with the three other vehicles.

The police chief said that the 54-year-old lorry driver fled the scene on foot after the accident but subsequently turned himself in at the Lukut police station, at around 5.30pm.

He will be remanded on Thursday (Jan 4) to assist in investigations.

Senior Assistant Superintendent Razif M. Haris, head of the Fire and Rescue Department in Port Dickson, revealed that it took 17 minutes to extricate Mr Rosli from the wreckage of the Honda.

The Honda that was crushed beneath the truck, was freed after the truck was lifted using a crane.

Traffic on the road resumed at around 4.25pm.

A local news agency reported that preliminary investigations found that the truck, which was coming from Sepang, had collided with the motorcycle, before skidding onto the opposite lane and crashing into the Honda Stream, and the two other vehicles.

According to The Straits Times, Mr Rosli was the owner of R S Bikes Centre, a motorcycle dealership in Kaki Bukit.

His son also helps in managing the firm.

A business owner who owns the neighbouring Sanfau Motor at Autobay, Mr Jawa, said that Mr Rosli's son had closed the shop at about 3pm after learning about the accident.

He added that Mr Rosli was a low-profile person and the shop has been in operation since eight years ago.

A sales manager for Lupromax engine oil, Mr Vanga Ganasan, 28, said that Mr Rosli was a client and a skilled mechanic:

"He was one of three mechanics in Singapore who knew how to maintain my 1990s BMW R1100GS motorcycle. He was a good man, and he was generous with his time.

"I did not think that it would be the last time I would see him." 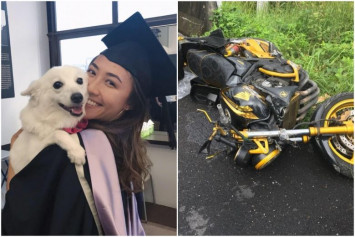 In response to media queries, a Ministry of Foreign Affairs spokesman said:

"MFA extends our deepest condolences to the family of the four Singaporeans who passed away in the tragic car accident at Port Dickson, Malaysia.

"The Singapore High Commission in Kuala Lumpur is in contact with the Malaysian authorities and is rendering the necessary consular assistance to the next-of-kin of the family."

So far, 11 Singaporeans have been killed in traffic accidents overseas since December 2017.