Liverpool players celebrating the first goal of the match against Crystal Palace during the Standard Chartered Singapore Trophy 2022.

SINGAPORE - Starved of top-class football action in the pandemic years, fans began partying outside the National Stadium hours before the start of the highly anticipated match between Liverpool and Crystal Palace on Friday night (July 15).

Decked out in jerseys, hats and scarves, pockets of fans were heard singing the Liverpool anthem, You'll Never Walk Alone, along the Kallang River or chanting "Allez, Allez, Allez" at the OCBC Square two hours before the 8.35pm kick-off.

The Premier League clubs are in Singapore for the one-off Standard Chartered Singapore Trophy, which Liverpool won 2-0 in front of 50,217 fans who brought back the buzz to the National Stadium.

The Kallang Wave returned in force as Palace and Reds fans serenaded their teams.

After the match, fan favourite Virgil van Dijk said it was overwhelming to see such support.

He added: "It's something that everyone wants to have, this kind of support all over the world and to be able to play for them here is a great feeling.

"It's (the upcoming season) going to be tough like we all know, but it's something we play for also, we play for the fans. Obviously those at Anfield but not everyone can watch us there, these fans here and also in Thailand, they're something we don't take for granted."

Gweneth Ang, 23, told The Straits Times that she had the time of her life. Her favourite moment was when the players walked out as she was seated quite near the tunnel.

She said: "I never imagined I would get to see them so close just like on TV. The atmosphere was quite hyped, even on the way here. People were crossing the overhead bridge holding scarves and singing the songs."

Javier Khoh, who has been a fan since 2008, hopes the Reds will be back after seeing the support here.

He added: "The experience was surreal... Seeing all the Liverpool supporters from Singapore gathered in one place was such an incredible sight. When the goals happened, the roar of the stadium was electric and it was the loudest I've heard at the Sports Hub in a long time."

Long-time fans Taufiq Wahab and Dinessh Raaj were there early to soak up the atmosphere with their friends and family.

Taufiq, who was in attendance the last time Liverpool played here in 2009, said: "I'm really excited to sing (with the other fans during the match) because Liverpool brought us all together and there's a sense of belonging (when we're doing that).

"This is my first time meeting Dinessh and it's nice that the club is bringing so many people together.

Another Reds supporter Pranav Gour even made sure to listen to Liverpool's fan chants on repeat before the match so that he would be able to sing along during the match.

This was the 25-year-old's first time watching Liverpool live since he became a fan in 2005.

He said: "I actually told myself that I would visit Anfield when we won the Premier League but Covid-19 hit that year so this opportunity was one that I couldn't miss." 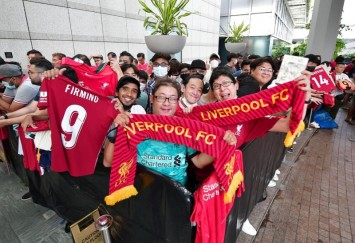 Sai, 41, said: "This is a great chance to meet the team face-to-face because we don't know when we'll be able to go to England to watch them.

"It will be my first time seeing them and I'm looking forward to watching Virgil van Dijk in action."

Palace fan Gareth Guyers did not mind being among the minority at the stadium. The Briton, who has been a fan since 1990, said: "Everyone is very cordial and welcoming and it's like a festival here. The energy is great, everyone's having a laugh and making jokes."

Fellow Palace fan Xavier Awe added: "We were worried that we would be the only Singaporeans in the fan zone but we've made so many friends and we've even been added to a WhatsApp group."