Singaporean woman on life support after accident in Melbourne

One of the Singaporean women involved in the horrific crash in Melbourne over the weekend is on life support.

Miss Gwyneth Lok, 20, a project executive with events company Chupa, suffered critical head injuries and has been in a coma since the accident on Saturday night.

Doctors at Alfred Hospital in Victoria, Melbourne, have told the family to be prepared for the worst, a reader familiar with the incident told The New Paper yesterday. TNP understands that Miss Lok underwent surgery to drain a build-up of fluid in her brain, and the damage to her head is critical.

Several of her family members, including her parents and 13-year-old brother, have flown to Melbourne to be with her.

Miss Lok, who recently graduated from Ngee Ann Polytechnic with a diploma in early childhood education, was one of the five Singaporeans involved in the accident.

The four women and one man were in a blue Renault at about 8.15pm (5.15pm Singapore time) on Saturday when the accident happened in Windermere, more than 100km from Melbourne. 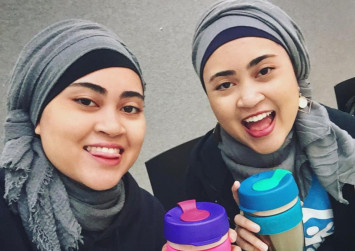 She was driving on Madden Road but allegedly failed to stop at the intersection with Remembrance Drive, causing a white Triton to hit the left side of the car. The Renault came to a halt after crashing into a nearby tree.

The 48-year-old driver of the Triton was not injured, but his 10-year-old daughter suffered minor injuries.

Nasuha and two passengers who were also her schoolmates were taken to Ballarat Base Hospital with minor injuries.

Her twin sister, Miss Naimi Nasser, a business management student from Singapore Management University, was air-lifted to Royal Melbourne Hospital for critical head and chest injuries. She is in a stable condition and conscious.

Miss Lok, who was initially thought to be 26, was flown unconscious to Alfred Hospital.

The reader who contacted TNP said Miss Lok flew to Australia last week and had planned to spend about 10 days holidaying there.

The reader, who did not want to be identified, described her as a bubbly and positive person who was well-travelled and independent. She added that Miss Lok had saved up for this holiday and was also saving up to further her studies.

Staff from Alfred Hospital confirmed that Miss Lok is in the Intensive Care Unit.

Attempts to reach Miss Lok's employer Chupa for comment have been unsuccessful.