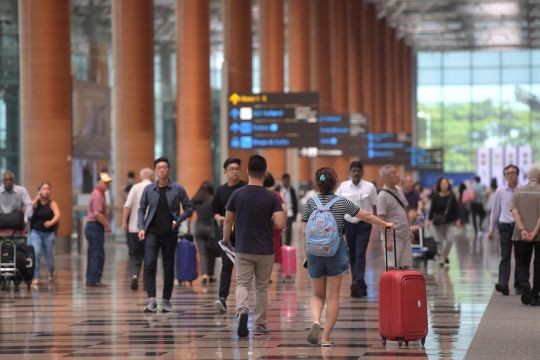 Nearly nine in 10 (88 per cent) of employees in Singapore felt they deserved more annual leave last year, up from 76 per cent in 2017. PHOTO: ST FILE

SINGAPORE - Nearly two-thirds of full-time workers in Singapore felt 'vacation-deprived' last year, with about four in 10 saying they could not get enough time off work to use up their annual leave. Some 77 per cent said they would take a pay cut to get an extra day off.

These were the findings of travel agency Expedia's latest vacation deprivation survey released on Thursday. The firm polled more than 11,000 full-time working adults across 19 markets globally, including 300 respondents in Singapore.

With 63 per cent of Singapore workers in 2018 feeling they did not get enough vacation time, the country moved up one spot to the sixth most vacation-deprived market in the world. This is up from 57 per cent who felt this way in 2017 and 41 per cent in 2016, according to Expedia's surveys for those years.

Nearly nine in 10 (88 per cent) of employees in Singapore felt they deserved more annual leave last year, up from 76 per cent in 2017.

Sentiments of vacation deprivation grew more rapidly in Singapore as compared to the global average, the study found. Singapore recorded a 6 per cent bump in these sentiments compared to 2017 - the fourth largest increase in the world. India and Thailand had the biggest jumps at 15 per cent and 14 per cent respectively, followed by the United States which saw a 9 per cent rise.

Strikingly, it emerged from the survey, that half of those polled in Singapore did not use up their annual leave - and this was mainly because they were unable to take time off work, with 39 per cent citing that as a reason.

Other reasons included the desire to save up time for a long holiday (30 per cent) and being unable to afford a holiday (22 per cent).

The survey also noted that "mental-health days" is a growing trend. Some 70 per cent of Singapore employees have taken at least one day off in the past year to relieve stress and focus on their mental well-being. On average, workers in Singapore took three mental-health days last year.

Employees in the Republic also remained connected to their work even when they are on holiday, with more than half admitting to doing so. Almost eight in 10 of them will check their emails or voicemails at least once while on holiday.

On top of that, 30 per cent of Singapore workers also felt that their supervisors expected them to be available constantly - the third highest percentage globally after India and Malaysia. "Taking regular, quality vacations is known to provide numerous positive benefits to the personal and professional well-being of workers," said Lavinia Rajaram, head of communications for Asia-Pacific at Brand Expedia.

"As vacation deprivation continues to rise in Singapore, it is now more important than ever for business leaders to identify the reasons behind these sentiments to foster an enabling culture for employees to take quality time off and make the most of their vacation time, for the good of their personal and professional well-being in the long run," Ms Rajaram said.

Meanwhile, the least vacation-deprived were Australia, Canada and Japan.