Singaporeans in Australia crash: Driver out on bail while injured twin sister remains in hospital

A Singaporean student has been released on bail in Australia after being charged with causing an accident in Windermere, more than 100km from Melbourne, over the weekend.

Nasuha Nasser, 21, a psychology and media and communications student at the University of Melbourne, was driving a blue Renault along Madden Road on Saturday at about 8.15pm (5.15pm Singapore time) when the accident happened.

The New Paper had reported yesterday that there were four others in the car, all Singaporean students, including Nasuha's twin sister Miss Naimi Nasser.

Read Also
Singaporean, 26, in critical condition after Australia accident; another charged in relation to the case 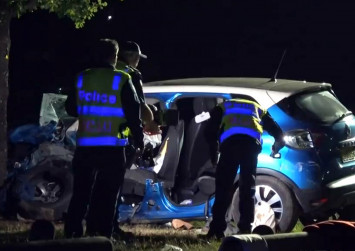 Nasuha had allegedly failed to stop at the intersection, causing a white Triton to slam into the left side of the car.

The Renault came to a halt after crashing into a nearby tree.

While Nasuha and a man and woman passenger were taken to Ballarat Base Hospital with minor injuries, her sister Miss Naimi, a Business Management student on the Dean's list at Singapore Management University, suffered critical head injuries and had to be air-lifted to Royal Melbourne Hospital. She is currently in a stable condition.

Another passenger, a 26-year-old woman student who suffered critical head and chest injuries, was flown to Alfred Hospital where she is fighting for her life.

The 48-year-old driver of the white Triton was not injured, but his 10-year-old daughter who was in the car with him suffered minor injuries.

According to news site The Courier, Nasuha appeared in the Ballarat Magistrates Court yesterday dressed in a tie-dye rainbow shirt and mussed hair and kept her head bowed during the bail application.

Detective Sergeant Amos said she was interviewed on Sunday evening and that she was "open, honest, and a full and frank discussion and account of events was provided".

The court heard that there is a sign 150m from the junction on Madden Road notifying drivers of the upcoming intersection and stop sign there.

But Nasuha said she was "unable to stop" when she arrived at the intersection and saw the stop sign.

While the prosecutor opposed bail, Detective Sergeant Amos said she would not be a flight risk if bail came with a condition of no travel.

Magistrate Gregory Robertson granted bail on the condition that Nasuha surrenders her passport and travel documents and reports weekly to the Melbourne North Police Station.

"On the basis that there's no risk of her fleeing, and given I accept that it was an oversight, not intentional or with aggravating features like her trying to kill people or run away from police... I grant bail with some conditions," he said.

A spokesman for the University of Melbourne confirmed to The New Paper yesterday that three of the Singaporeans, including Nasuha, are students there.

"A representative from the University is visiting the students in hospital and is speaking to their families," he said.

"The University will continue to provide support to the students and their families."

A spokesman for the Ministry of Foreign Affairs told TNP yesterday that the Singapore High Commission in Canberra is rendering consular assistance to the five Singaporeans and their families.

The maximum penalty for culpable driving and dangerous driving causing death is jail for 20 years.

Nasuha is expected to return to court in February.