Offers of financial help and support have poured in from Singaporeans for the young son and family of Piang Ngaih Don. The 24-year-old domestic worker from Myanmar had died after months of horrific abuse inflicted upon her by her Singaporean employer and other members of the household.

Details of the traumatic abuse suffered by the victim were detailed in media reports after a court hearing on Tuesday (Feb 23).

Local non-profit Humanitarian Organisation for Migration Economics (Home) shared on Facebook Thursday (Feb 25) that it had been inundated with messages from Singaporeans who wanted to donate to the Piang's family in Myanmar.

The organisation added that it will be helping to transfer funds donated from members of the public to Piang's family.

A part of their post read: "We are truly moved to see the community’s desire to help and support Piang’s family in the wake of her abuse.

"While we are not doing a fundraising drive, Home will be assisting in making a transfer of funds from members of the public who wish to donate to her family."

The single mother from Myanmar's Chin State died in July 2016, a year after arriving in Singapore in May 2015 to work as a domestic helper. She had wanted to earn more money in order to support her young son who was barely two years old then.

According to reports, the abuse started five months after her employment. Piang weighed only 24kg when she died, having lost 38 per cent of her body weight in the lead-up to her death.

From the autopsy, Piang was found to have died from a brain injury due to the deprivation of oxygen. A total of 31 recent scars and 47 external injuries were also found on her body.

In a Facebook post by Singaporean film producer Lynn Lee on Thursday, Lee detailed meeting Piang's family back in their village in 2016. Piang's story was featured in a documentary on underaged domestic workers in Singapore.

UPDATE: Am overwhelmed by the number of people who've reached out to ask how they can help Piang's little boy. Thank you...

According to Lee, Piang had been a month shy of turning 23 (the legal age of domestic workers) when she left home for Singapore. She wrote: "Her agent had bribed an immigration official to alter the date of birth on her passport."

Lee met Piang's son who was two and a half years old, as well as her sister and villagers of Dimpi who mourned the loss of the young single mother.

Lee described the boy as having "big eyes" and a "runny nose".

She added: "It was not surprising he was unwell. Dimpi was cold and dusty, and there wasn't enough food or running water. Everyone in the village seemed to have a cough."

According to details in the 2016 documentary broadcast on Al Jazeera, Piang had somehow managed to call her sister two weeks before her death, saying that she wanted to go home because she was "not feeling well'. It was the last time they spoke.

Less than 24 hours after sharing her post on Piang's story, Lee indicated that she was "overwhelmed by the number of people who've reached out to ask how they can help Piang's little boy".

"Thank you for restoring my faith in humanity," she wrote. 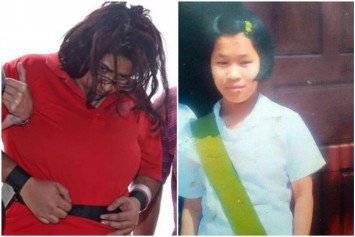 A court hearing on Tuesday (Feb 23) saw footage of the frail-looking victim being grabbed by the hair and shaken like a rag doll. Her former employer, Gaiyathiri Murugayan, 40, is currently awaiting sentencing.

Closed circuit video footage had also captured Gaiyathiri pouring cold water on the victim, punching and kicking her while Piang was on the ground, and strangling her. Piang was also denied proper meals, often allowed only bread soaked in water, cold food from the refrigerator or some rice.

In her last moments alive on July 26, 2016, Piang was assaulted by both Gaiyathiri and Prema for being too slow in doing the laundry. She was tied to a window grille without dinner. Piang suffered another round of abuse before dawn, where Gaiyathiri stomped on Piang's head and neck repeatedly, pulled her head back by her hair and choked her.

She was later found motionless in the morning at 7.30am. Paramedics arrived at around 11.30am and pronounced Piang dead.