Singapore's economy grew 5.9 per cent in the fourth quarter of 2021, bringing full-year growth to 7.2 per cent, according to advance estimates from the Ministry of Trade and Industry son Monday.

Singapore's economy grew 5.9 per cent in the fourth quarter of 2021, bringing full-year growth to 7.2 per cent, according to advance estimates from the Ministry of Trade and Industry (MTI) on Monday (Jan 3).

Coming in slightly higher than the official full-year growth forecast of "around 7 per cent", this is the highest full-year gross domestic product (GDP) growth rate since 2010's record 14.5 per cent.

But just as 2010's growth came after a mild contraction the year before, the 2021 figure marks a rebound from 2020's record 5.4 per cent contraction, which had been Singapore's worst recession since independence.

The Q4 growth figure represented a moderation from the revised figure of 7.1 per cent growth in the previous quarter.

On a quarter-on-quarter seasonally-adjusted basis, the economy grew 2.6 per cent in Q4, faster than the 1.2 per cent growth in Q3.

Q4 growth was led by the manufacturing sector, which grew 14.0 per cent year on year, accelerating from Q3's 7.9 per cent growth. This was supported by output expansions in all clusters, with particularly strong growth in the electronics and precision engineering clusters due to sustained global demand for semiconductors and semiconductor equipment respectively.

On a quarter-on-quarter seasonally-adjusted basis, the manufacturing sector grew 4.2 per cent, up from 0.2 per cent in the third quarter.

The construction sector grew 2 per cent in Q3, slowing from the 66.3 per cent growth in Q3, which had been due to a low base effect in the year-ago period.

In absolute terms, the construction sector's value-added remained 26 per cent below its pre-Covid level in the fourth quarter of 2019, as worksite activity continued to be weighed down by labour shortages, due to border restrictions on the entry of migrant workers.

And on a quarter-on-quarter seasonally-adjusted basis, the sector contracted 4.4 per cent in Q4, reversing from Q3's 4.9 per cent growth.

The services sector grew 4.6 per cent overall. The strongest growth was by the information and communications, finance and insurance, and professional services group, which grew 6 per cent, though this was a moderation from the previous quarter's 8 per cent growth.

All sectors in this group saw expansion. Information and communications continued to benefit from strong demand for IT and digital solutions, as well as robust games and software publishing activities, while the finance and insurance sector was bolstered in part by fund management activities.

On a quarter-on-quarter seasonally-adjusted basis, the sectors in the group grew 3.1 per cent in Q4, faster than the 1.5 per cent growth in Q3.

The wholesale and retail trade and transportation and storage sectors grew by 4.3 per cent, extending the 6.1 per cent growth in the third quarter. 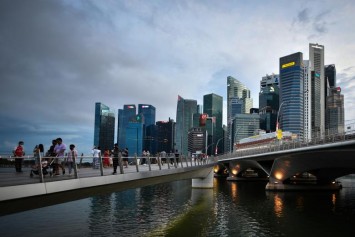 Within this group, the wholesale trade sector saw steady growth, in tandem with Singapore's robust merchandise exports performance, said MTI. But growth in the transportation and storage sector was partly due to low base effects.

The remaining group of services sectors - accommodation and food services, real estate, administrative and support services, and other services - grew 3.1 per cent, extending the 3.8 per cent growth in the previous quarter.

All sectors in this final group saw expansion, except for the accommodation and food services sector, with MTI attributing this primarily to ongoing travel restrictions, as well as tighter domestic restrictions on dining-in group sizes compared to the year-ago period.

Overall, the value-added of the sectors in this group stayed 7.1 per cent below the pre-Covid level in Q4 2019. On a quarter-on-quarter seasonally-adjusted basis, these sectors expanded by 4.9 per cent in Q4 2021, improving from the 1.5 per cent growth in Q3.

Separate growth figures for the sectors within each group were not provided in the advance estimates.

As Singapore's recovery moderates, the official 2022 full-year forecast is for 3 to 5 per cent growth.

The advance estimates are computed mainly from data from the first two months of the quarter, October and November. Revised preliminary estimates based on more data will be released in February.