Singapore's headline inflation rises to 3.2%, highest in over 8 years

SINGAPORE'S headline inflation rose to 3.2 per cent in October, the highest in over 8 years, according to consumer price index (CPI) data from the Monetary Authority of Singapore (MAS) and the Ministry of Trade and Industry (MTI) on Tuesday (Nov 23).

The last time headline inflation crossed the 3 per cent mark was in March 2013.

The increase, compared with 2.5 per cent in September, reflected stronger private transport and accommodation inflation, in addition to core inflation, said the authorities.

Core inflation, which excludes accommodation and private transport, rose to 1.5 per cent in October, from 1.2 per cent in the previous month.

This came on the back of higher services and food inflation, as well as a smaller decline in the cost of retail and other goods, the authorities said.

Private transport inflation jumped to 14.3 per cent in October, up from 10.8 per cent, due to the stronger increase in car prices.

Accommodation inflation rose to 2.5 per cent, up from 1.9 per cent in September, on the back of a larger increase in housing rents.

Services inflation, which rose to 1.6 per cent from 1.2 per cent in September, was a result of higher prices for airfares and holiday expenses. Tuition and other fees, as well as prices of recreational and cultural services, also rose more sharply, according to the authorities.

Food inflation inched up to 1.7 per cent in October, up from 1.6 per cent, as the prices of non-cooked food rose more quickly even as that for prepared meals remained largely unchanged.

Read Also
Coronavirus: How the massive pandemic debt bill has 'reshaped the global economy for good' 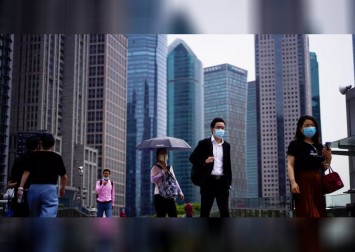 Inflation for retail and other goods was the only outlier. Costs declined at a slower pace of 0.4 per cent, compared with 1 per cent in September, due to a smaller fall in the prices of clothing and footwear as well as telecommunication equipment.

On a month-on-month basis, both sets of indicators rose 0.3 per cent in October. The authorities said headline inflation was driven by higher private transport costs amid rising car prices, while core inflation reflected a pickup in services costs and higher electricity and gas prices.

"The labour market recovery is expected to become more entrenched with the easing of Covid-19 restrictions and a pickup in economic activity," said MAS and MTI.

They noted that wages have picked up and are anticipated to rise at a steady pace as slack in the labour market dissipates.

The authorities are keeping to their inflation outlook for now, with core inflation expected to come in near the upper end of the 0 to 1 per cent forecast range this year. It is expected to increase further to 1 to 2 per cent next year.

Headline inflation is still expected to come in at about 2 per cent this year and average 1.5 to 2.5 per cent next year, they added.