The water issue resurfaced last year when Dr Mahathir said that the price of raw water sold to Singapore is "ridiculous" and that Malaysia will approach Singapore to renegotiate the terms of the agreement.

SINGAPORE - The Singapore Foreign Ministry said on Tuesday (Feb 19) that the attorneys-general of Malaysia and Singapore met after both prime ministers agreed that officials should have discussions to better understand each other's positions on the right to review the price of water.

However, the ministry said that the meeting in December was overshadowed by new issues. It was responding to media queries in the wake of comments on Tuesday by Malaysia's foreign minister that "negotiations" on the price of water had taken place last month.

The ministry reiterated that Prime Minister Lee Hsien Loong and his Malaysian counterpart Mahathir Mohamad had "expressed their willingness for officials to have further discussions to better understand each other's positions on the right to review the price of water under the 1962 Water Agreement" during a meeting in Singapore in November.

It added: "The Attorneys-General of both countries subsequently met in December 2018, but their discussions were overshadowed by the new issues that had arisen over the Johor Baru Port Limits and the Seletar Instrument Landing System procedures." 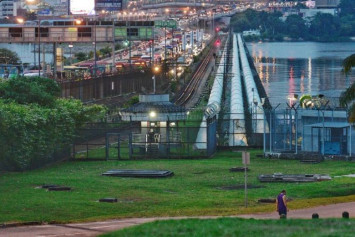 "We are now into the second stage of negotiations where we want to talk numbers. The first stage was to agree to talk. That in itself is quite an achievement," he told reporters after visting the Rohingya Education Centre in Klang, Selangor.

The water issue resurfaced in June last year when Dr Mahathir said that the price of raw water sold to Singapore is "ridiculous" and that Malaysia will approach Singapore to renegotiate the terms of the agreement.

Under the 1962 Water Agreement between the two countries which expires in 2061, Singapore is entitled to draw up to 250 million gallons a day (mgd) of raw water from the Johor River at three sen (one Singapore cent) per 1,000 gallons.

Johor is entitled to buy five mgd of treated water from Singapore at 50 sen per 1,000 gallons. Singapore has said this price is heavily subsidised and below the cost of treating the water.

Singapore's stance is that in 1987, Malaysia lost its right to review the price under the 1962 Water Agreement when it chose not to do so.