Singapore's Odette leaps 10 spots to No. 8 on The World's 50 Best Restaurants list

Another Singapore restaurant - popular barbecue restaurant Burnt Ends in Teck Lim Road, with chef Dave Pynt at the helm - also made the list, debuting at 34.

The highly acclaimed Noma - helmed by chef Rene Redzepi - was crowned No. 1 - heralding its return to the top.

Noma took the top spot from French restaurant Mirazur - which moved to the Best of the Best category, a hall of fame for those who have been previously crowned No. 1 on the list.

Taking the No. 2 spot this year was another Copenhagen restaurant, Geranium.

Rounding out the top five were Asador Etxebarri from Axpe, Spain, which retained its No. 3 spot; Peru's Central, inching up two notches to fourth place; and Barcelona's Disfrutar, which moved four spots to No. 5.

The list - which started in 2002 - resumed its live awards ceremony after a year's hiatus due to the Covid-19 pandemic.

In 2019, the glitzy award ceremony was held in Singapore's Marina Bay Sands.

The Highest New Entry went to Italy's Lido 84, which marked its debut at No. 15. 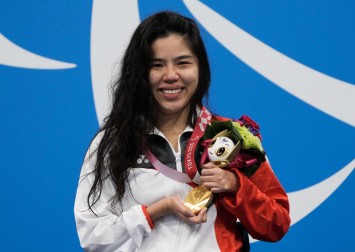 Other newcomers to the list included South Africa's Wolfgat at No. 50; New York's Atomix at No. 43; and Japan's Florilege at No. 39.

Meanwhile, Odette also bagged the Best Restaurant in Asia Award, with Burnt Ends coming in at No. 14.

Although Odette is No. 2 on the Asia's 50 Best Restaurants list announced in March, it surpassed The Chairman on the World's 50 Best list.

Special awards given out during the ceremony included the Icon Award to French-born chef Dominique Crenn, co-owner of San Francisco's Atelier Crenn which is ranked No. 48; and The World's Best Female Chef accolade to Peruvian chef Pia Leon.

Leon's two restaurants featured on the 51 to 100 list that was previously released on Sept 23.

Kjolle is ranked at No. 95, while Mil, the Cusco restaurant and research centre which she runs with chef-husband Virgilio Martinez, debuted at No. 90.

The annual list is produced by British media company William Reed Business Media and is based on a voting panel comprising international chefs, restaurateurs, gourmands and food journalists.

A post shared by The Worlds 50 Best Restaurants (@theworlds50best)

It is a privilege to be here alongside our peers at The World's 50 Best Restaurants 2021 Awards Ceremony today, even...