SingHealth doctor, 44, dies from leukaemia: She wanted to write letters to her 3 kids for every growing-up year she'd miss

A SingHealth Polyclinics director who helped to launch the government healthcare system's first 24-hour prescription collection service has died of leukaemia after suffering a relapse this year. She was 44 years old.

Dr Agnes Koong was the director of Marine Parade Polyclinic in 2016, where she oversaw the launch of Prescription in a Locker Box, also known as Pilbox. The service was set up so that patients, especially the elderly, who required urgent medication could pick up their drugs after hours. Koong later took up the position of Director, Community Health, at SingHealth Polyclinics.

According to Lianhe Wanbao, Koong was diagnosed with leukaemia during the circuit breaker period last year and underwent a bone marrow transplant. However, she suffered a relapse this year.

She died on Monday (Sept 6), leaving behind her husband Simon Leong and their three children, her parents, and a sister. The couple's three young children —  one boy and two girls — are aged 11 to 15.

Leong told Wanbao that Koong decided to stop her treatment at the start of August this year. She rejected the idea of a second bone marrow transplant and instead hoped to use her remaining time to live her life well.

Leong added: "As her husband, it was very painful, but I chose to support her decision."

Her choice to not seek further treatment was met with resistance from her parents, who felt that she was young and could still fight the illness. But Koong eventually managed to convince them to respect her decision.

The couple first met at university, and he described her as multi-talented. She loved to dance, entering several competitions and would also choreograph mass dances and stage performances.

Leong described how she loved her job and always did her best to treat her patients. Even after her diagnosis last year, Koong insisted on working and held meetings from home. She still had projects on her plate and had wanted to see them to completion.

After her death, Leong said many of her former patients called to express their condolences.

"Although my wife loved her work, she also loved life. She was not a workaholic, and would always try her best to make time for her family," said Leong, adding Koong would often come home for dinners with the family and spend time with them on weekends.

Leong shared that their son, 11, did not fully understand the situation when Koong moved into a hospice and still felt that his mum could recover. During her last days, the family spent as much time as they could together, making handicrafts or just chit-chatting. 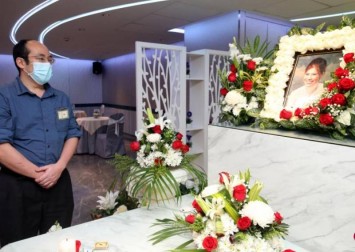 Leong also revealed that Koong had initially wanted to write letters to each of her children for every of their growing-up years that she would miss.

"It would be as though she is still right there beside them when they read the letters," said Leong. Unfortunately, Koong only managed to write a few letters to them in the time that she had.

Shared Leong: "She told me before she passed that she had lived a meaningful and fulfilling life. She also told our children that she will continue to look out for all of us from heaven."

Emeritus Senior Minister Goh Chok Tong shared a tribute to Koong on his Facebook page on Thursday about her contribution to the Marine Parade Polyclinic, stating that "our health service has lost someone in the prime of her life".

"She was one of the key figures in bridging the gap between social and medical services in Marine Parade," wrote Goh.

We in Marine Parade are saddened by the passing of Dr Agnes Koong (in blue dress). Our health service has lost someone...

Posted by MParader on Wednesday, September 8, 2021