SINGAPORE - SingPost on Monday (Jan 14) apologised to customers for its recent service failures, which it said were due to a "tremendously busy" peak season in November and December that was "beyond forecasts and expectations".

Due to an increase in the volume of packages, SingPost's postmen had to make an extra 20 doorstep deliveries on average daily, as well as work beyond their usual hours, SingPost said in a Facebook post.

"We hired extra resources, recalled personnel and activated teams from the corporate office on Saturdays just to meet the demand as well, but our service quality still suffered as a result," said SingPost, as it sought to explain its "service deterioration".

Social media users have in recent weeks been vocal about what they claimed was poor delivery service by SingPost.

We hear you. And we should have done better. Dear SingPost customers, You may have heard about our service failures...

Facebook user Andy Lau, whose Dec 26 post went viral, said a delivery man left a note at his doorstep and ran off after knocking at his door for a few seconds.

Mr Lau added that he confronted the delivery man, who seemed unable to give an explanation for his actions.

SingPost said in its post that, being part of the service industry, it is dependent on front-line staff to provide the best experiences for customers, though "inevitably, there will be employees who may not act in the best interests of the company". 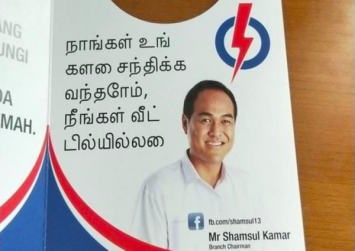 It added: "We have experienced service failures due to the individual actions of a few employees. We are aware that this not only reflects badly on our organisation, but also undermines the hard work, commitment and dedication that the majority of our postal staff are displaying every single day.

"Such behaviour will not be tolerated."

Apologising to customers, SingPost said it is taking a serious look at the issues that have surfaced in recent weeks and will find ways to improve immediately.

It processes an average of three million mail items daily.

"We assure you that we will be vigorous in reviewing and revising our operational procedures, so that you will receive your letters, packages and parcels without delay, without hassle and, most importantly, without frustration," SingPost added.

Despite SingPost's apology, several netizens were still unhappy and left comments on its Facebook page.

Facebook user Jesse Cheong claimed that a postman had forged her signature on a delivery notice a while ago and left the item in her letterbox without her knowledge.

Another user, CP Tan, said he received an empty envelope from China that was cut open in November and reported it to SingPost's customer service.

Mr Tan said he received an SMS from SingPost a few days later saying that the mail was delivered in good condition, but he was not satisfied with their reply.

However, some people were more sympathetic. Facebook user Selina Wee said: "It's tough on SingPost when there are so many online purchases nowadays. Be more understanding."