A sample of the message that was sent to SingPost customers in an attempt to scam them.

SINGAPORE - SingPost has issued an alert to members of the public, warning them not to be taken in by text messages from scammers.

The postal service provider uploaded a photo of one such fake message on its Facebook page on Thursday (Feb 7). The message claims that recipients have won a prize in "SingPost' (sic) January Prize Draw", and tells users to click on a link to collect their prize.

A SingPost spokesman told The Straits Times that while the fake text messages come with a number of different links, one such link directs those who click on it to a fraudulent website with the SingPost logo.

The spokesman said that SingPost was first alerted to the scam messages by several of its customers on Monday, who had asked about the links via the SingPost hotline and on its social media platforms.

As the week progressed, the number of customers contacting SingPost about the messages spiked, prompting the organisation to put up a warning on its Facebook page.

The spokesman added that SingPost has notified the police about this scam. 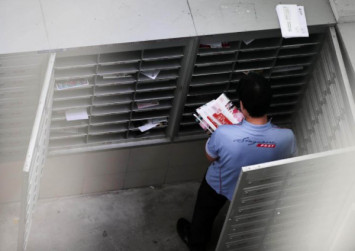 In its Facebook post, SingPost said that those who receive text messages, calls or e-mails which claim to be from it should not provide any personal information or transfer any money that may be requested.

This is not the first time scammers have attempted to impersonate SingPost.

In November last year, SingPost said it received several inquiries from customers about calls and e-mails claiming to have come from it.

And in June 2016, SingPost warned members of the public to ignore any callers who claimed to be from its organisation.

In an advisory on its website, SingPost said it does not initiate automated voice calls and uses English as its primary language of communication.

All official e-mails from SingPost will be sent from addresses ending with "@singpost.com", and not personal e-mail accounts such as Hotmail, Gmail, or other unfamiliar e-mail domains.